Over the course of the 2009 FIRST robotics competition season, we discovered that the team's robot needed a new set of transmissions. I had driven the robot during the season. I thought the high speed of our robot was a major advantage, but the motors had overheating problems. Having built the robot's transmissions for the previous two years I figured it was a good idea to get the newer team members more involved in the transmissions. I offered advice and "pro tips" to help them along, but they designed the transmissions themselves. Even though I didn't design them, I still made most of the parts so they would get finished in time for an off-season competition.

These transmissions didn't require a lot of machine time. The axles had to be cut to length and the gears had to be bored. The plates were cut by another member of the team. There were some 13 tooth gears that I had to make custom. These were made in the exact same way as the gears in my prototype shifting transmission. 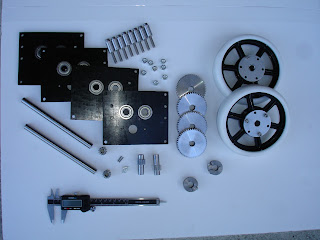 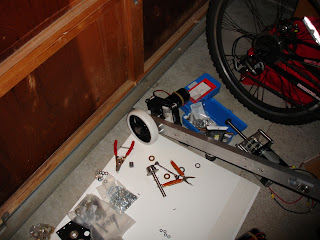 They should prevent the motors from burning up at any future competition or demo.
Posted by JB at 9:24 PM No comments:
Email ThisBlogThis!Share to TwitterShare to FacebookShare to Pinterest
Labels: Robotics, Transmission
Newer Posts Older Posts Home
Subscribe to: Posts (Atom)