I've wanted a real RC car (not one of those tiny indoor only RC cars) since I was a little kid. Now that I'm a big kid I can just go out and get one. In this case I mail ordered a relatively cheap 4WD 1:10 scale buggy. The frame came as a kit. I had to pick out the motor, motor controller, radio, and batteries. I already had the radio from the mini combat robot, which cut the cost of the car. The reason I decided to buy a RC car instead of building one was that I didn't want to build something and then decide it was boring. I figured a cheap RC car would require repairs and could have an opportunity for many custom parts. 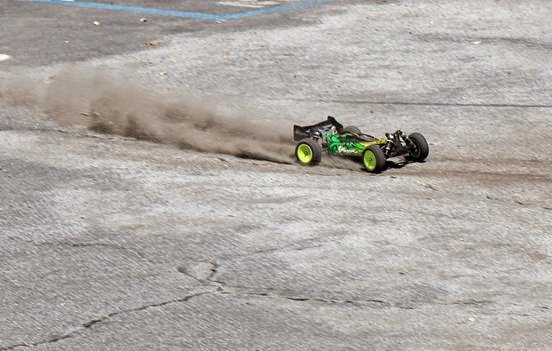 Here's a sweet action shot of the car before parts started breaking. I put a "somewhat" larger motor and battery in the car than suggested. The car's peak speed is over 40mph! (timed by driving on a football field) It probably has more power than I can control... I flipped it and hit things a full speed many times as well as taking jumps that brought the car around head height in the air. Needless to say the cheap plastic parts started breaking real fast. 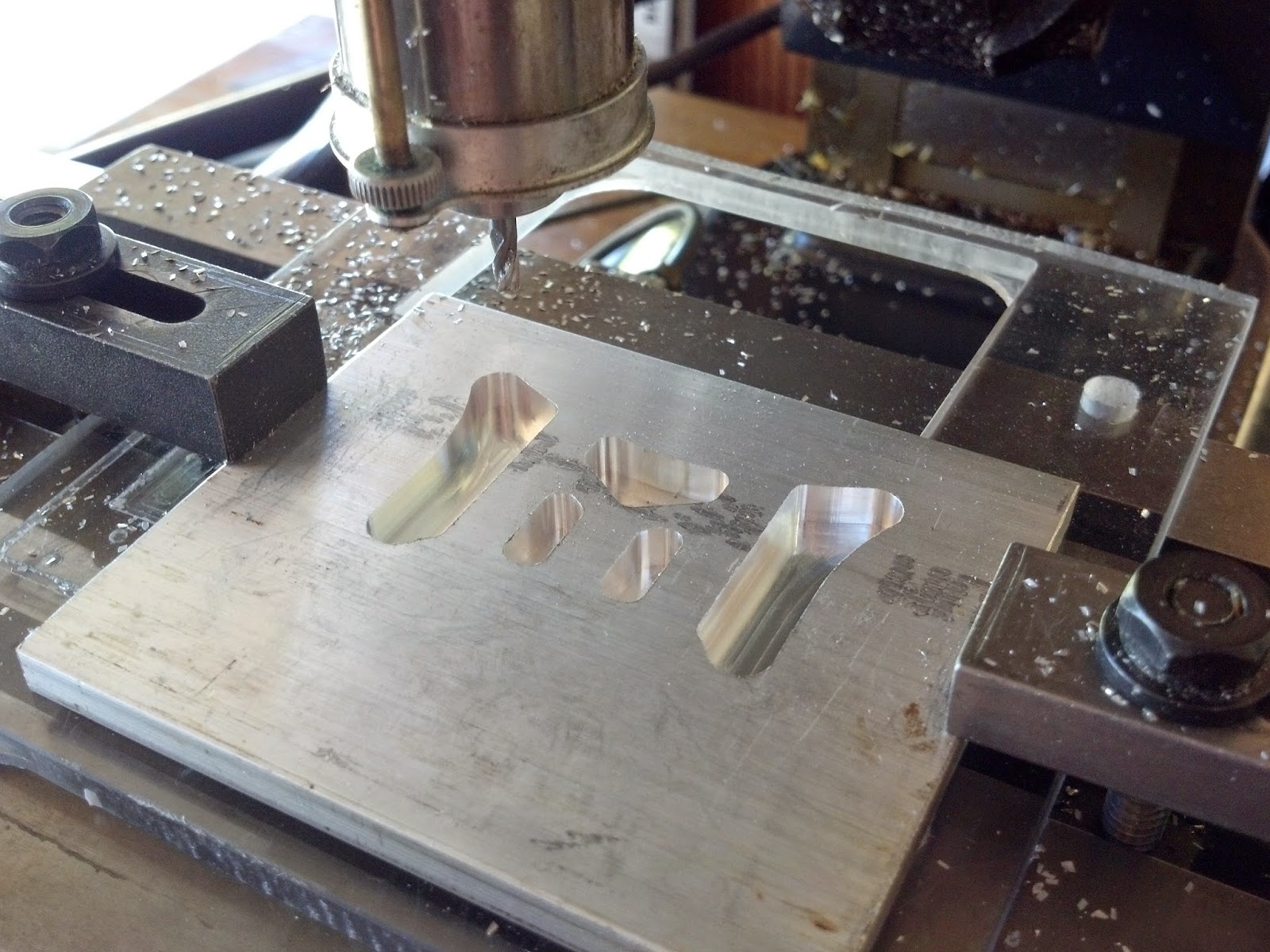 Here's the machining of a new shock absorber mount. The original part didn't break, but it bent ~45 degrees. I decided a metal version would be a good first upgrade for the car. 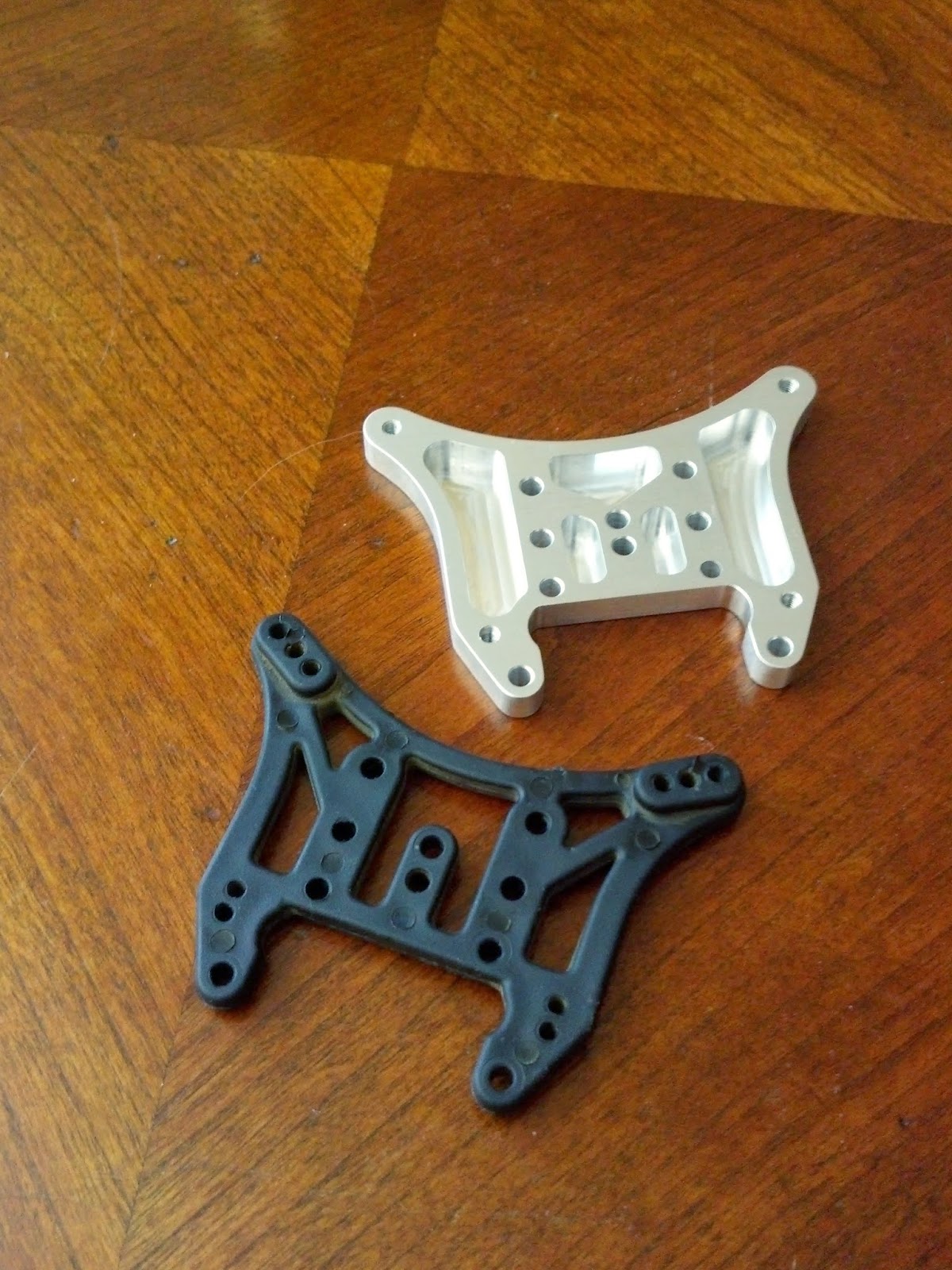 Here is the aluminum part next to the original (which I bent back). I removed some of the extra "adjustment" holes that were in the original part. I also remade the pockets to make the part considerably stronger. I don't expect this part to break before any of the other parts on the car. 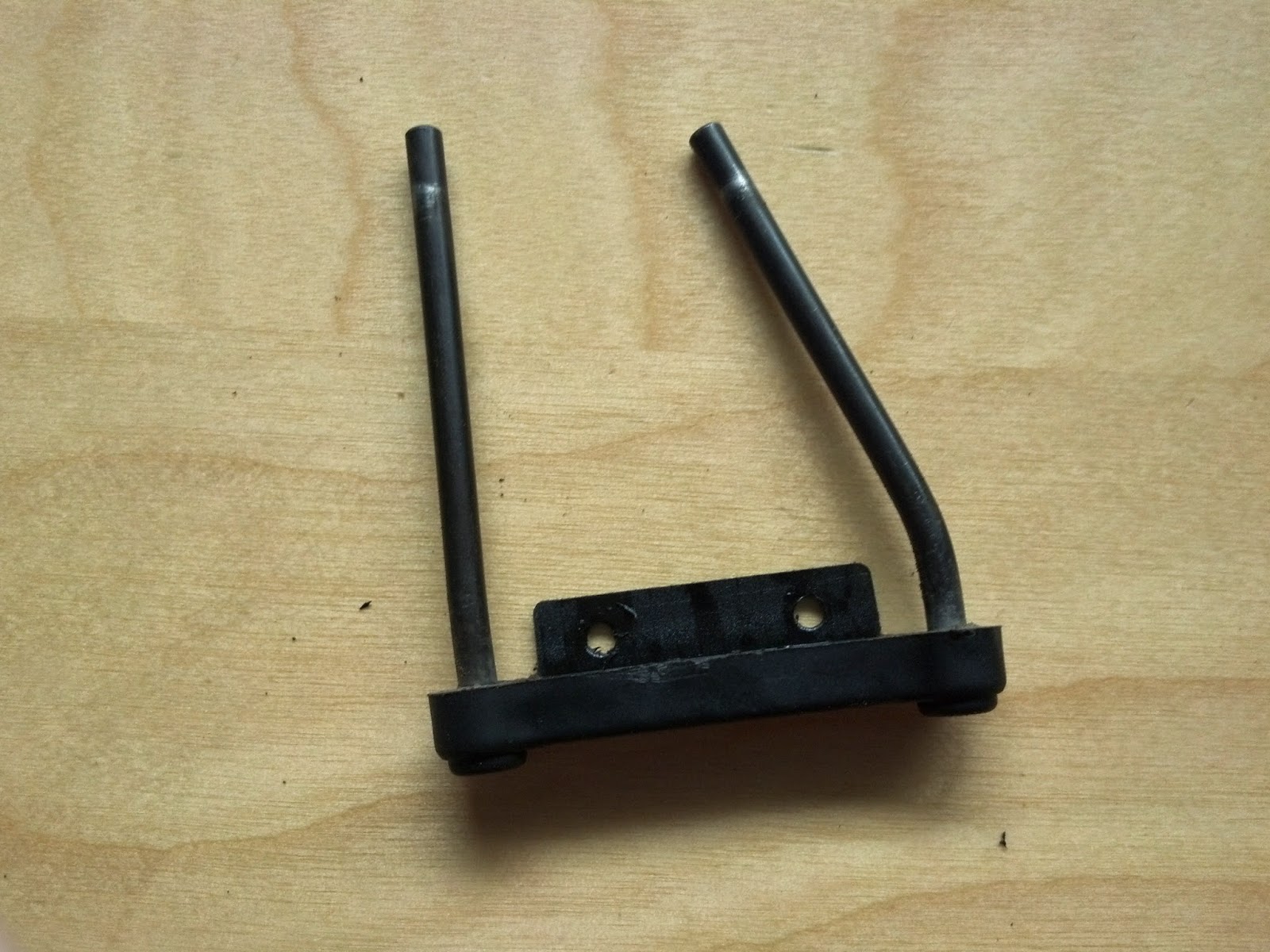 After a few more jumps I busted the front A-arms. I didn't have a spare axle so I was forced to bend this one straight again. Thankfully the axle was made from cheap steel and I have decent pliers. 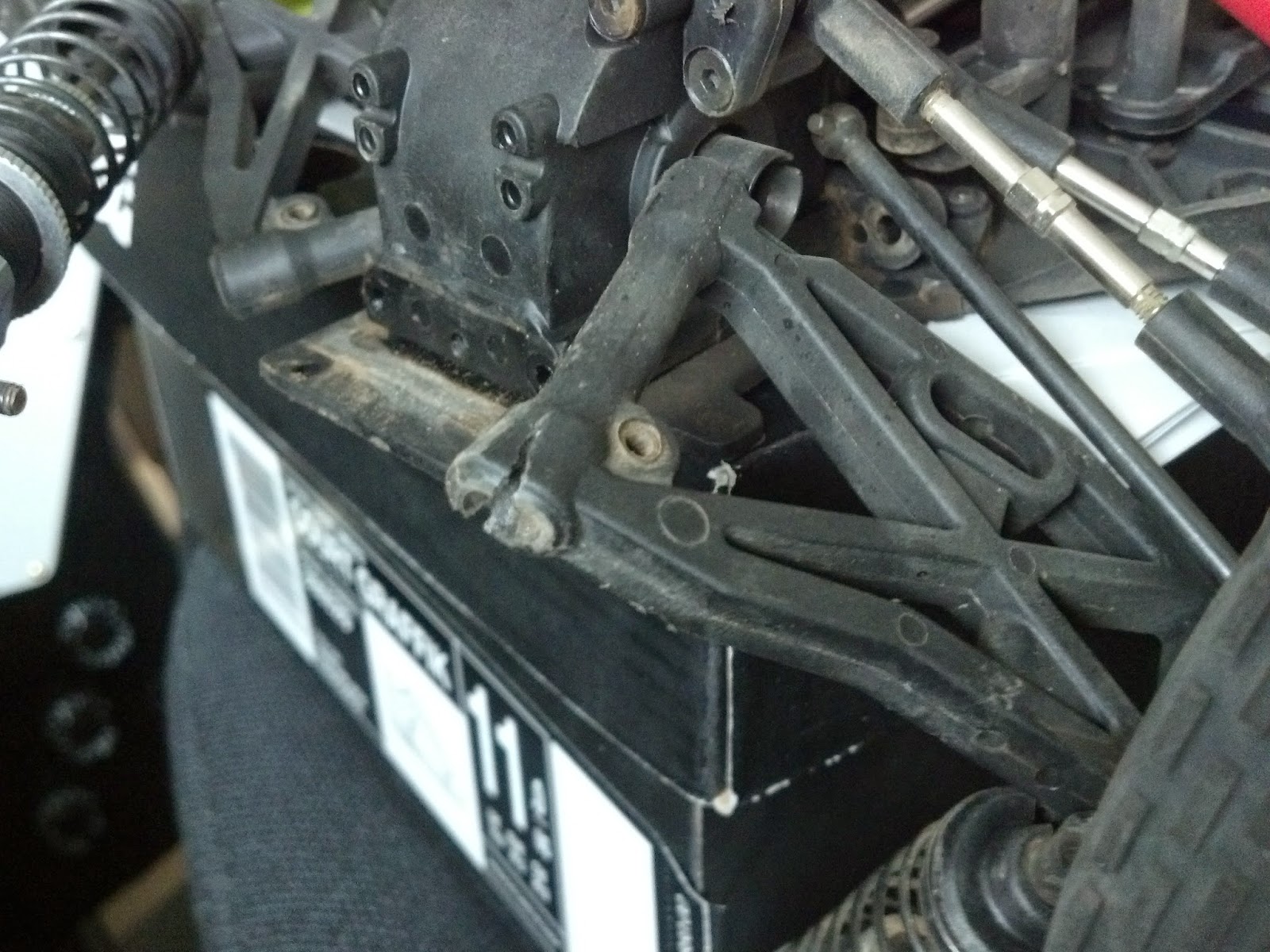 Here is the A-arm that broke. The plastic split at the axle. This part is not a simple 2D part like the shock mount. 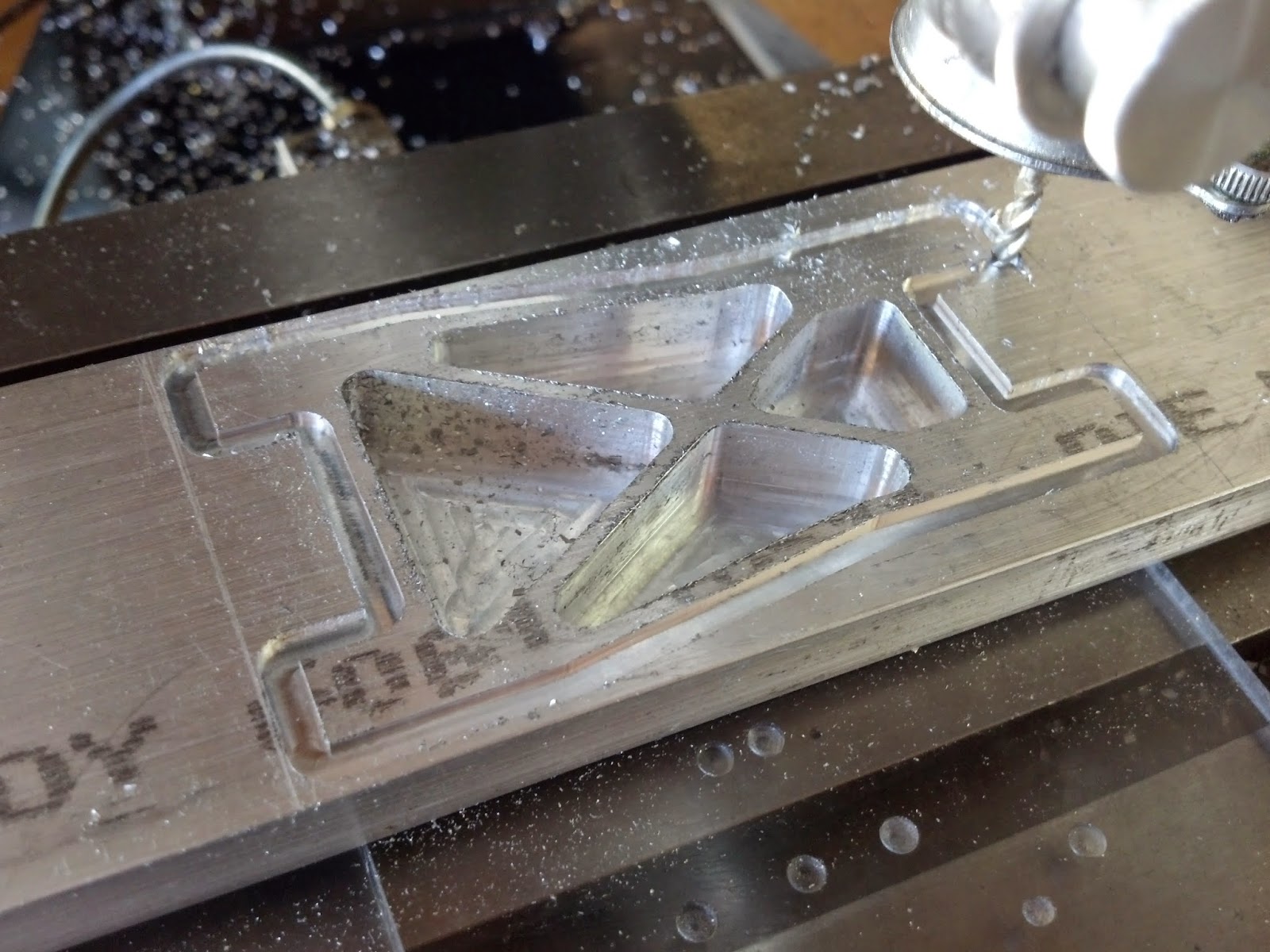 I started the part from flat aluminum plate. I forgot how slow it is to mill with a 1/8" endmill... 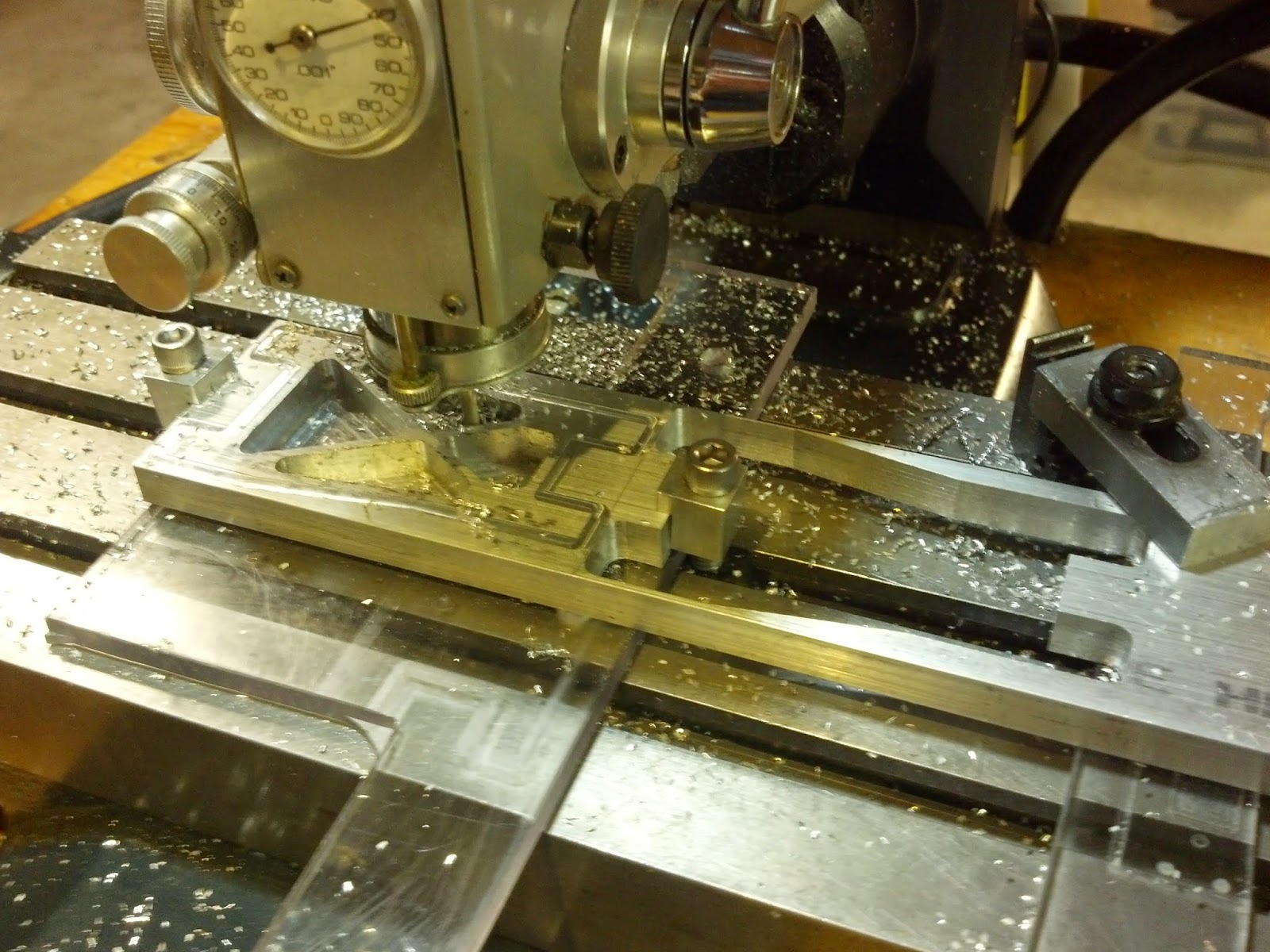 I wanted to save material so I did a REALLY good job orienting the stock on the mill table. 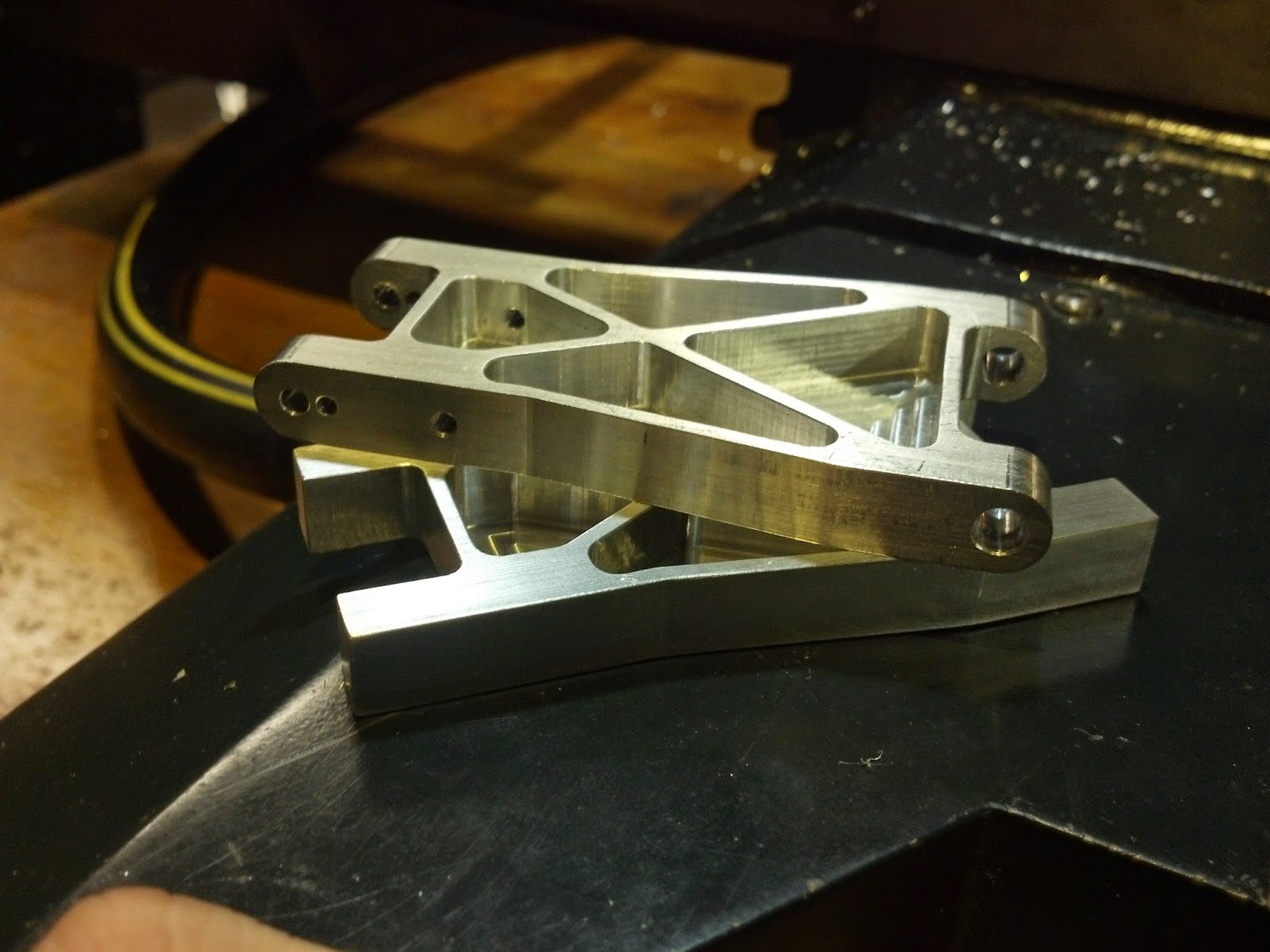 Here's a before and after picture of the side machining. The parts required a total of 3 sides of machining each. 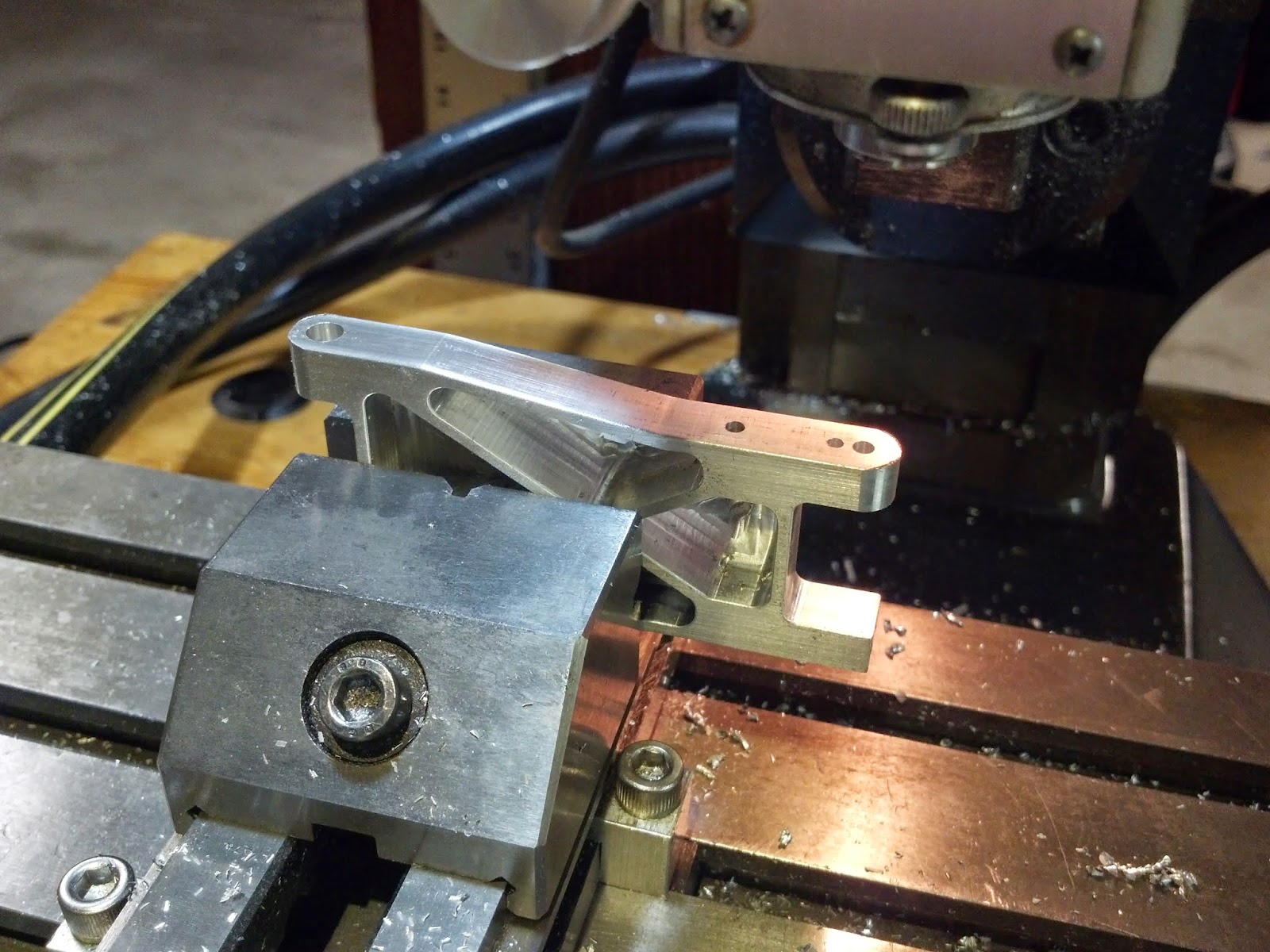 My trusty mini-vise did a great job holding the parts. I also tried a set of carbide drill bits. They seemed to drill much better than my sketchy old drill bit set. 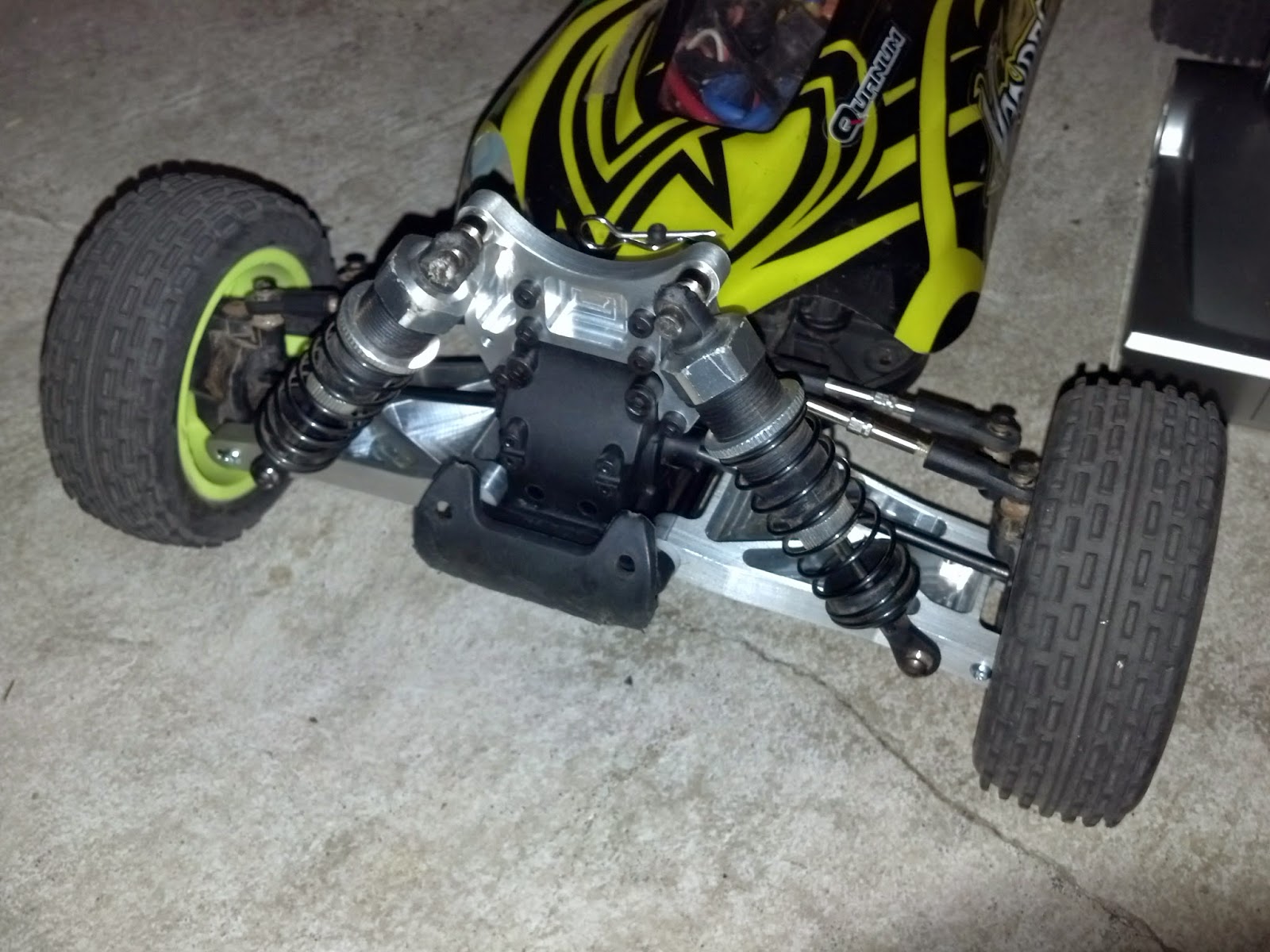 The new A-arms look pretty nice on the car. The shock spring mounts rub the aluminum a bit. I'll need to make some replacements to prevent any possible damage to the shocks. 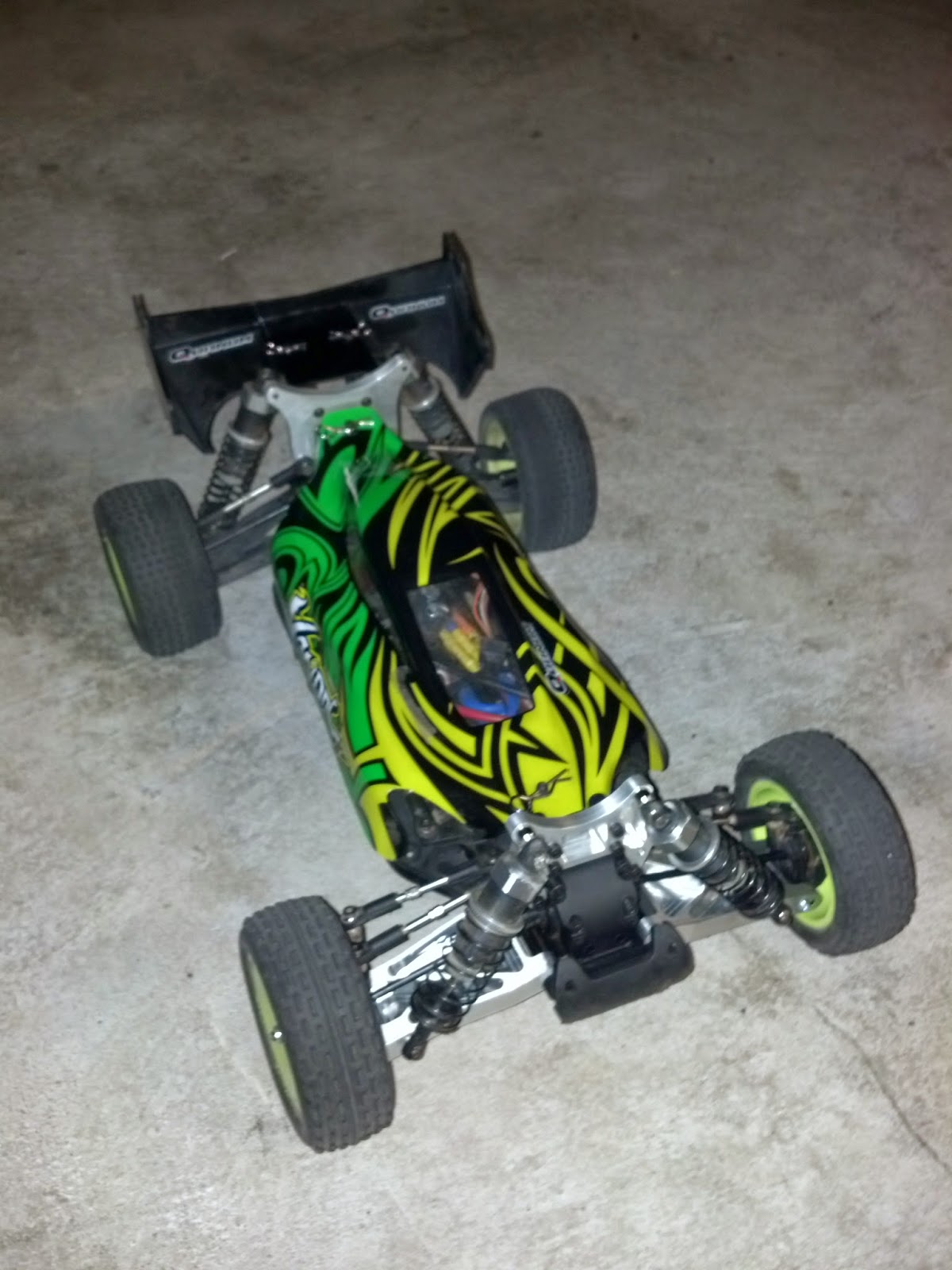 Here's the whole car with its cover attached. The rear wheels are pretty worn down. Those will have to be replaced soon as well. 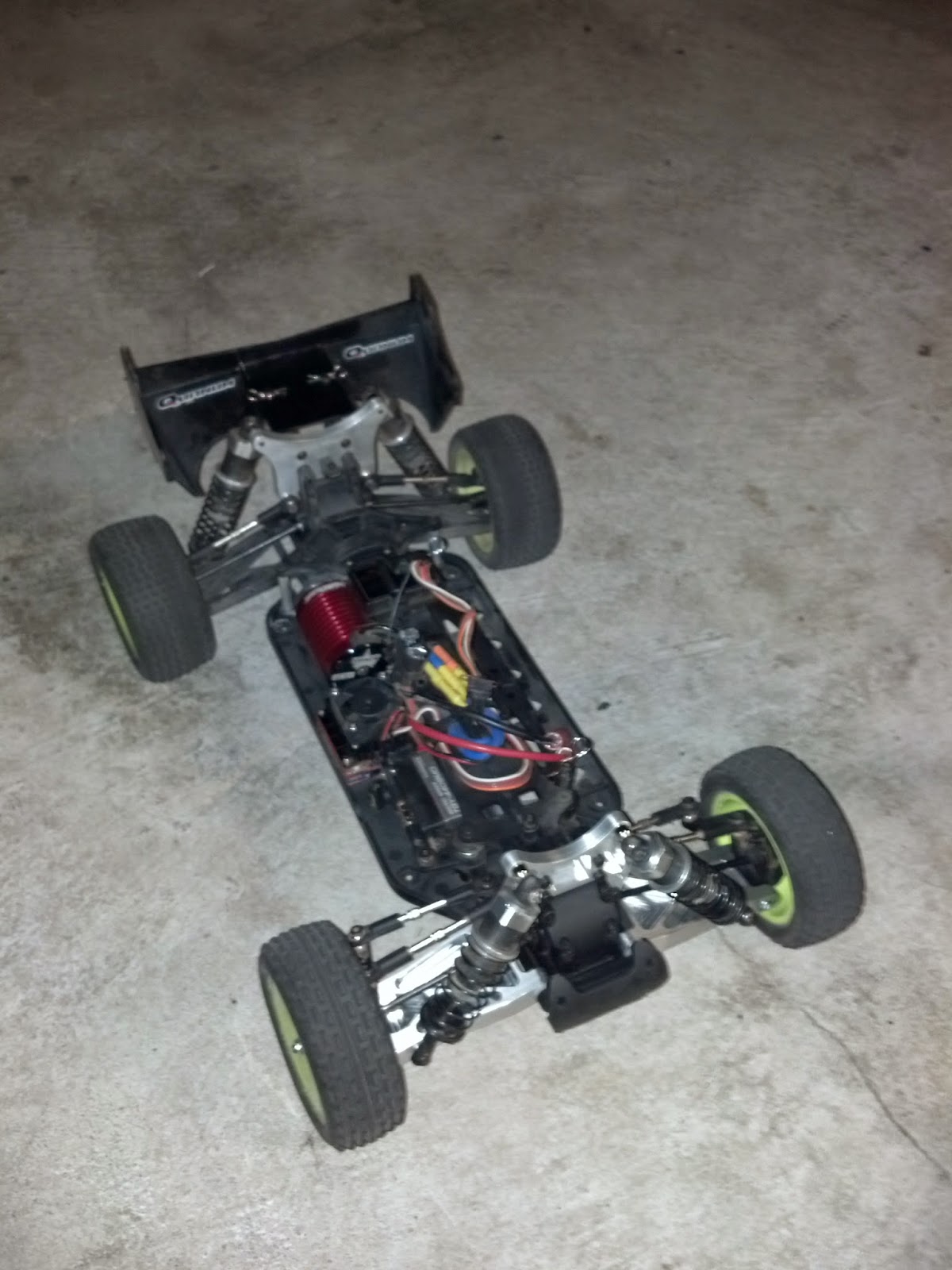 Here's the car without the cover attached. The electronics are fairly compact. I've been very impressed with the motor and motor controller combination. Neither has melted yet!

Overall I'm glad I bought an RC car instead of making one from scratch. I really wouldn't be able to beat the price I paid for the frame. When a part breaks I can have fun making a replacement. Eventually the whole car will be custom!
Posted by JB at 7:22 PM No comments:
Email ThisBlogThis!Share to TwitterShare to FacebookShare to Pinterest
Labels: Aluminum, Broken, Brushless, CNC, Mill, Motors, Rc Car
Newer Posts Older Posts Home
Subscribe to: Posts (Atom)