Hey! It's a new project. Ok... I lied. I sorta played around with designing a guitar over a year ago. However I didn't get serious about it until now. I made a few pieces last summer to test a new vice I bought for my CNC. 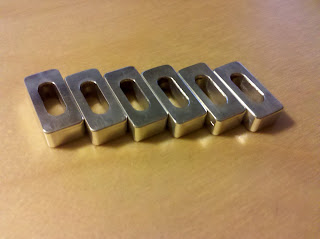 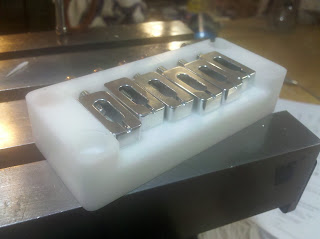 I attempted to make the bridge for the guitar. The aluminum adjustment pieces turned out great. The prototype plastic bridge machined fine (except for a minor code error that cut through one corner). I didn't like the feel of the bridge, so I redesigned it. I probably won't be able to make any parts for a while until I get access to the large new CNC machines at school.

Here's a few renders of different revisions of the guitar design: 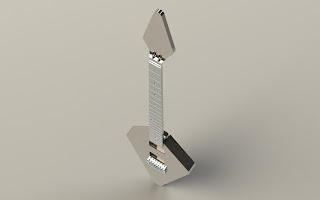 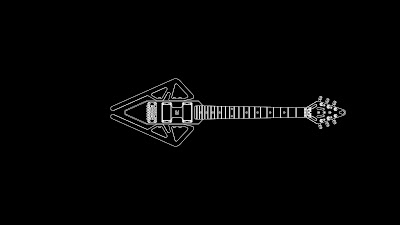 The evolution of the design has made the parts machinable and the material affordable because I no longer need a 300 dollar billet of aluminum to make the body. The lightening pattern not only makes it look better in my opinion but it also drops the weight down to a normal-ish guitar. Oh... I'm not sure if I pointed out that the thing will be entirely made from metal. The majority will be aluminum, while the fret board and screws are stainless. I figured a stainless steel fret board would scratch less easily than an aluminum one.

Some key features to this current design are:
- Countersunk hex socket screws for fret markers. They also hold the fret board to the neck.
- A 3D profile machined neck.
- Interchangeable parts. If I decide the design sucks after I make the guitar, I only need to change some of the parts. The design is split into many different parts that bolt together, so I can always replace parts that don't perform the way I want them to perform or if they get damaged.

Hopefully I'll get this project machined in a timely manner unlike the long board.
Posted by JB at 10:44 AM No comments:
Email ThisBlogThis!Share to TwitterShare to FacebookShare to Pinterest
Labels: Aluminum, CAD, Guitar, Machining, Polishing, Render

I finally beasted out the under glow modules for the board. 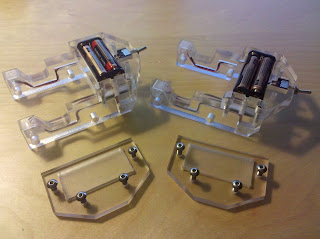 I decided to make two separate modules because I didn't have a way to run wires across the board in a clean way. Since the deck is clear everything is visible. KLUDGES ARE UNACCEPTABLE! (unless you can hide them =D) 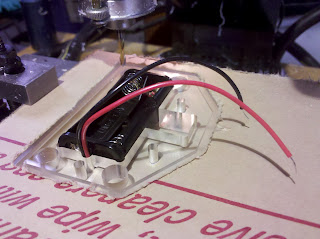 The parts were all machined from acrylic because it was the cheapest thing in the scraps bin at the local plastic store. I hadn't CNC'd any acrylic before. Its harder to cut, but it looked a lot better after machining. 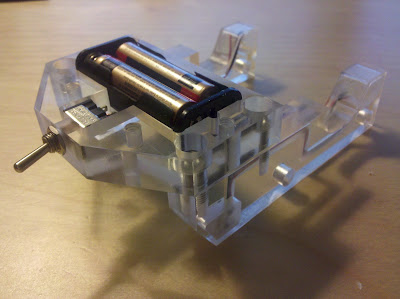 There are four blue LEDs per module. I tried to keep everything as waterproof as possible, but it's more water "resistant" than water proof. The LEDs are all run in parallel from the two AAA batteries. I looked at the data sheets for the LEDs and found I didn't need a special LED driving circuit because the maximum voltage from the two AAA batteries was less than the maximum voltage the LEDs could handle without burning up. I attempted to seal the LEDs with hot glue into the modules. The machined paths for the wires look amazing especially when lit in the dark. 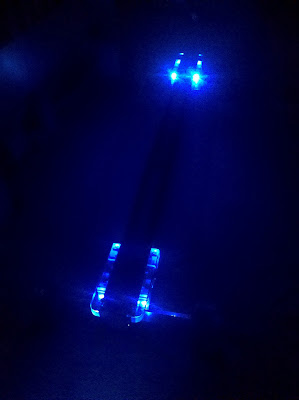 It's nice to complete a project for once. I always seem to get a project mostly finished but then move onto something new. The under glow was really fast to machine. I guess I was just a little lazy and put it off because it wasn't necessary to use the board for transportation.

Here's a list of PROS and CONS for the board:

PROS
-Looks hella beast (that means it looks great in Northern California)
-Extremely smooth ride. The incredible mass of the board keeps it from getting stuck on the usual pebbles and other junk on the ground that can stop a normal board.
-INDESTRUCTIBLE! The 1/2" polycarbonate combined with the two 1/2" x 1" solid aluminum rails give this board 0 flex. Some FEA simulations in SolidWorks suggest it may be able to handle up to around 800 pounds. That's plenty strong enough to stop me from breaking it while jumping. (I have tested by stomping on it... It's not going to break)
-It's reliable. The components were all made from high quality non-corrosive materials (aluminum, plastic, stainless steel). Water and other things in a normal environment won't cause this board any problems.
-It has headlights for night riding. The under glow's position and brightness lights up the road ahead for a good 20 feet.
-It's safe(er). The under glow makes it visible at night so your'e less likely to get run over.

CONS
-It's HEAVY. By the end of spring semester I'm going to look like the hulk after carrying this board where I'm not allowed to ride. Pushing off is also going to bulk up my legs. You can SERIOUSLY feel its mass.
-The wheels suck in wet conditions. I found this out with the wooden board. If its even slightly damp you will   beef it on a corner. The wheels hydroplane really easily.
-It has terrible ground clearance. Some of the bolts in the trucks hang down too low. They catch on minor cracks in the ground. I've already chipped some concrete while riding. Thankfully the mass of the board kept me going without falling.

Overall I really like it. Even the weight of the board has become somewhat of a feature to me. When this board gets moving it doesn't want to stop, so I don't have to bail as often. I guess I'll see how it survived during the coming semester.
Posted by JB at 10:04 PM No comments:
Email ThisBlogThis!Share to TwitterShare to FacebookShare to Pinterest
Labels: Acrylic, CNC, Longboard, Underglow

I finally got around to finishing up the parts I made during the fall semester. I polished the rails on the long board to a near mirror finish. I also bought the necessary window film to protect the deck from getting scratched to hell while riding. 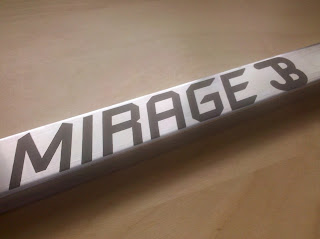 No project is complete without a good transformer name and a logo! 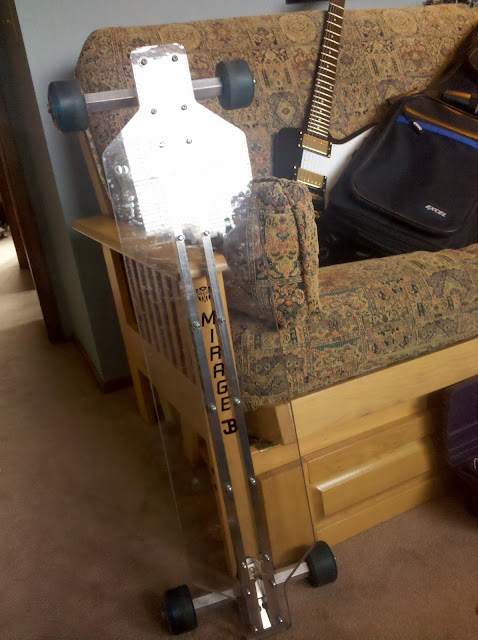 It looks better than I had imagined it would look. I just hope it stays looking good after years of riding every day.
Posted by JB at 3:55 PM No comments:
Email ThisBlogThis!Share to TwitterShare to FacebookShare to Pinterest
Labels: Aluminum, Deck, Longboard, Polishing, Polycarbonate, Vinyl
Newer Posts Older Posts Home
Subscribe to: Posts (Atom)