For a number of reasons we (the combat robot club at my school) have started work on a mini combat robot competition that will take place on campus. This summer we've worked on getting the competition ready for the coming school year. The first thing I started with was the drivetrain. I wanted to avoid making all of the gears as I have for many of my other motorized projects, so I looked for a cheap and easy to purchase solution. I found large RC vehicle (car, plane, boat, etc...) servos have very cheap replacement gear sets. I bought two sets of the largest common servo I could find. This gear set works with the HITEC 805 servo series.

All of my motorized projects now use brushless motors. They deliver the most power in the smallest package. They are also very cheap compared to other motors. These little transmissions use a set of 220 watt motors. Each motor is about 20mm in diameter and 40mm long. The only down side to these small motors is they spin very quickly which requires a large gear ratio to make them useful. Thankfully the servo gears make this gear ratio easy to obtain. I designed the maximum output torque of the transmission not to exceed the original servo's rated torque. This should prevent the gears from immediately stripping. Wear may become an issue because of the increased gear speed, but I'm not too worried about that because they're a cheap and easy to replace solution. 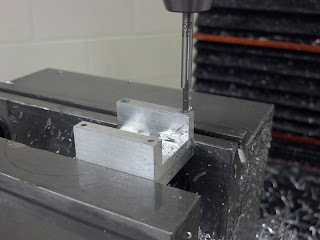 Since these transmissions are for a mini combat robot, the screws also have to be small. I had quite a few #2-56 holes to tap. As always I was afraid of breaking the tap, but in the end I tapped 24 holes without incident. 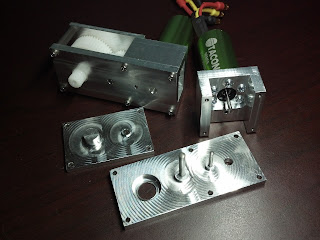 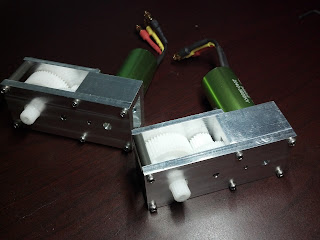 Overall the transmissions look pretty beastly. I'm waiting on pinion stock for the motor gears to come in from an order. I'll test them once I can actually transfer motion from the motors to the rest of the gears.

The next step in the mini combat robot build process is to get the motor controllers designed (yes; I'm making the motor controllers from scratch) and to finish the chassis CAD.
Posted by JB at 1:10 AM No comments:
Email ThisBlogThis!Share to TwitterShare to FacebookShare to Pinterest
Labels: CNC, Combat Robot, Gears, Mill, Mini, Motors, Transmission
Newer Posts Older Posts Home
Subscribe to: Posts (Atom)