I finally needed to print a functional gear. Driving my RC car in the snow was a bit too much for the main reduction gear (My 3D printed A-arms seemed to hold up fine this time). Snow got into the gear (due to a very poor design that left the gear exposed) and was turned to ice by compression from the pinion gear. The built up ice seemed to push the motor out of the correct meshing distance. The motor then proceeded to grind away most of the teeth. 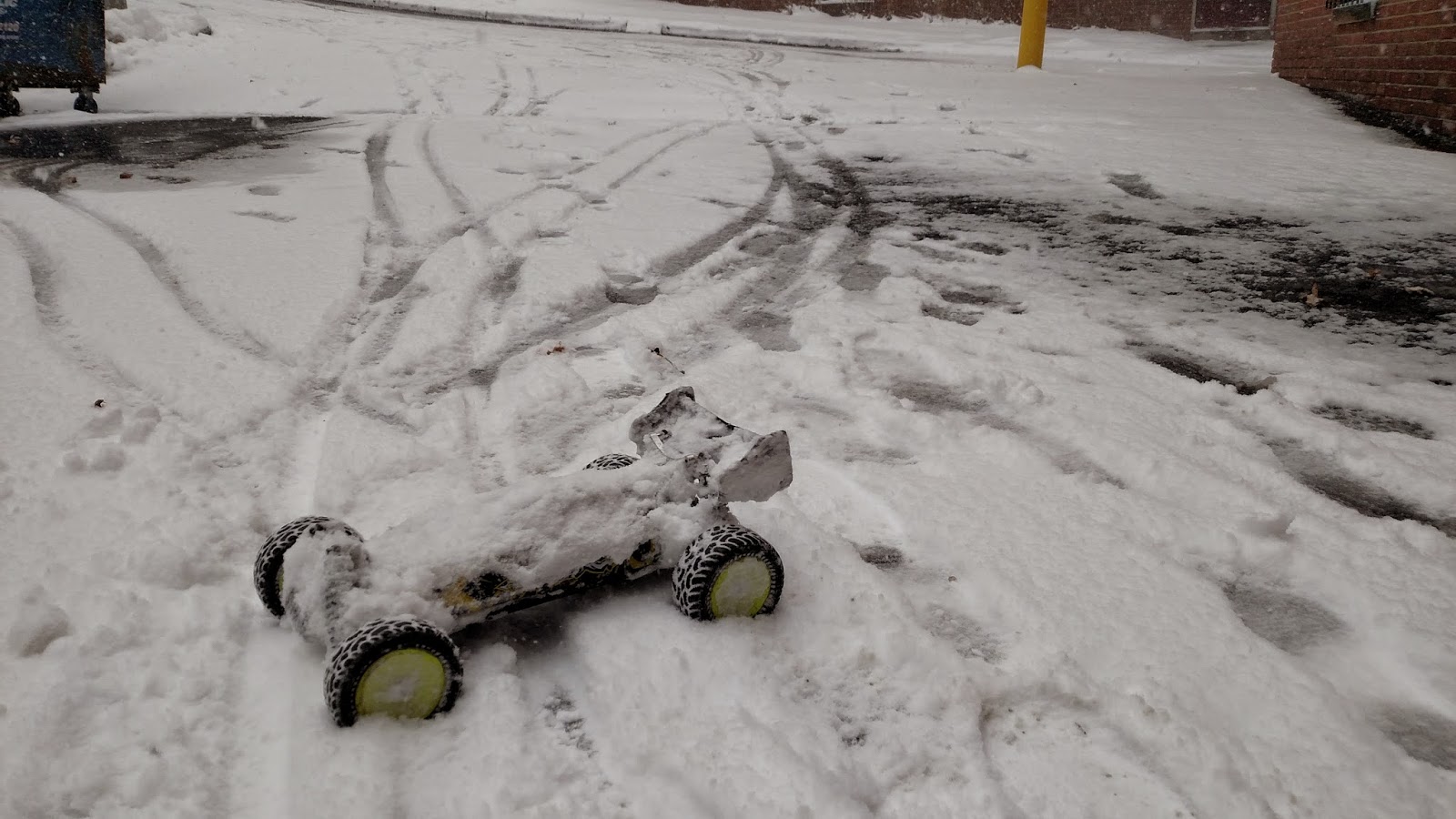 The snow was deeper than this in most spots. I took this picture after the car had already stripped the teeth from the main reduction gear. 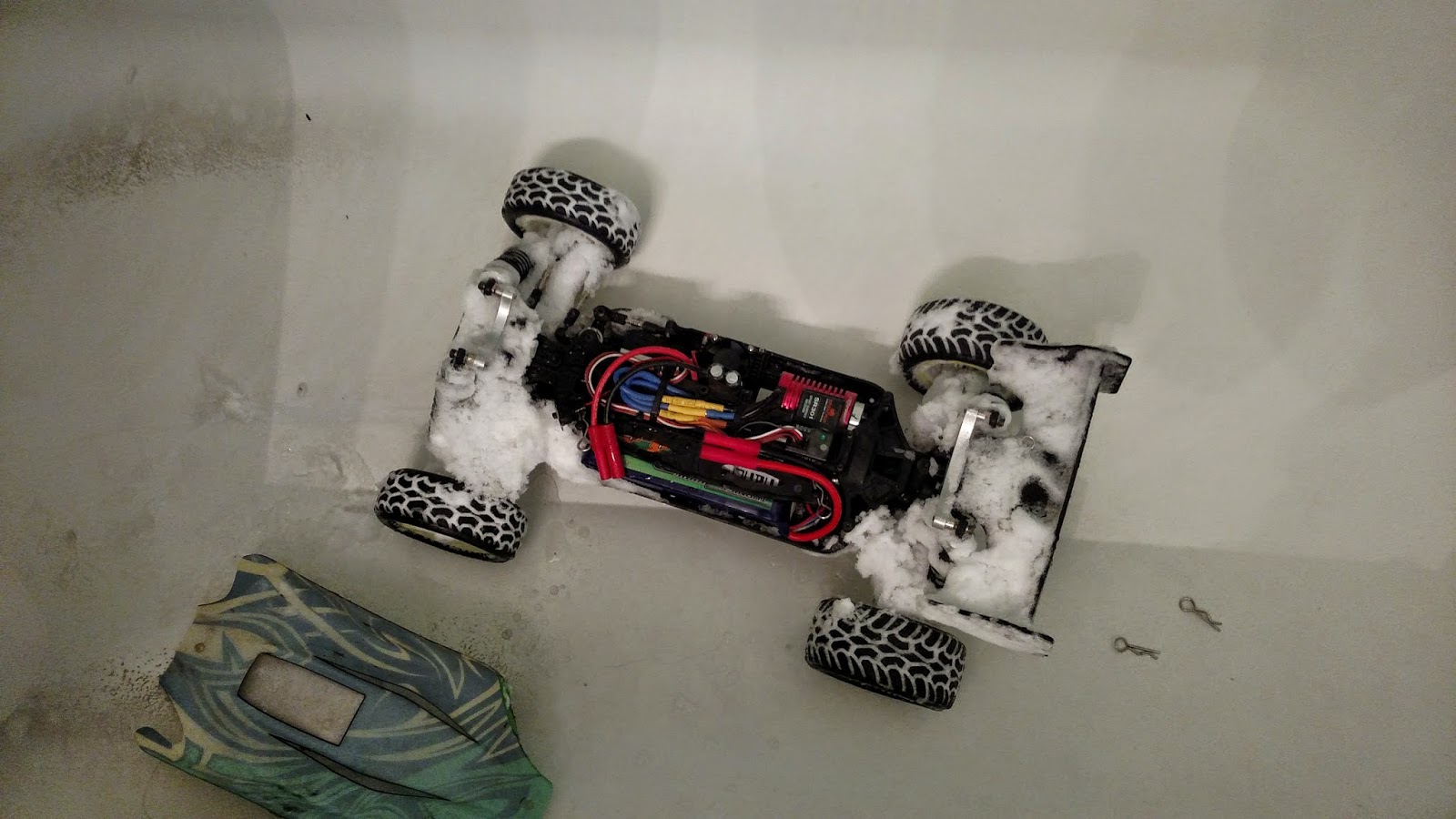 I put the car in the bathroom to wait for the snow to melt. The electronics avoided the water for the most part, so the only damage  done to the car was the stripped gear. 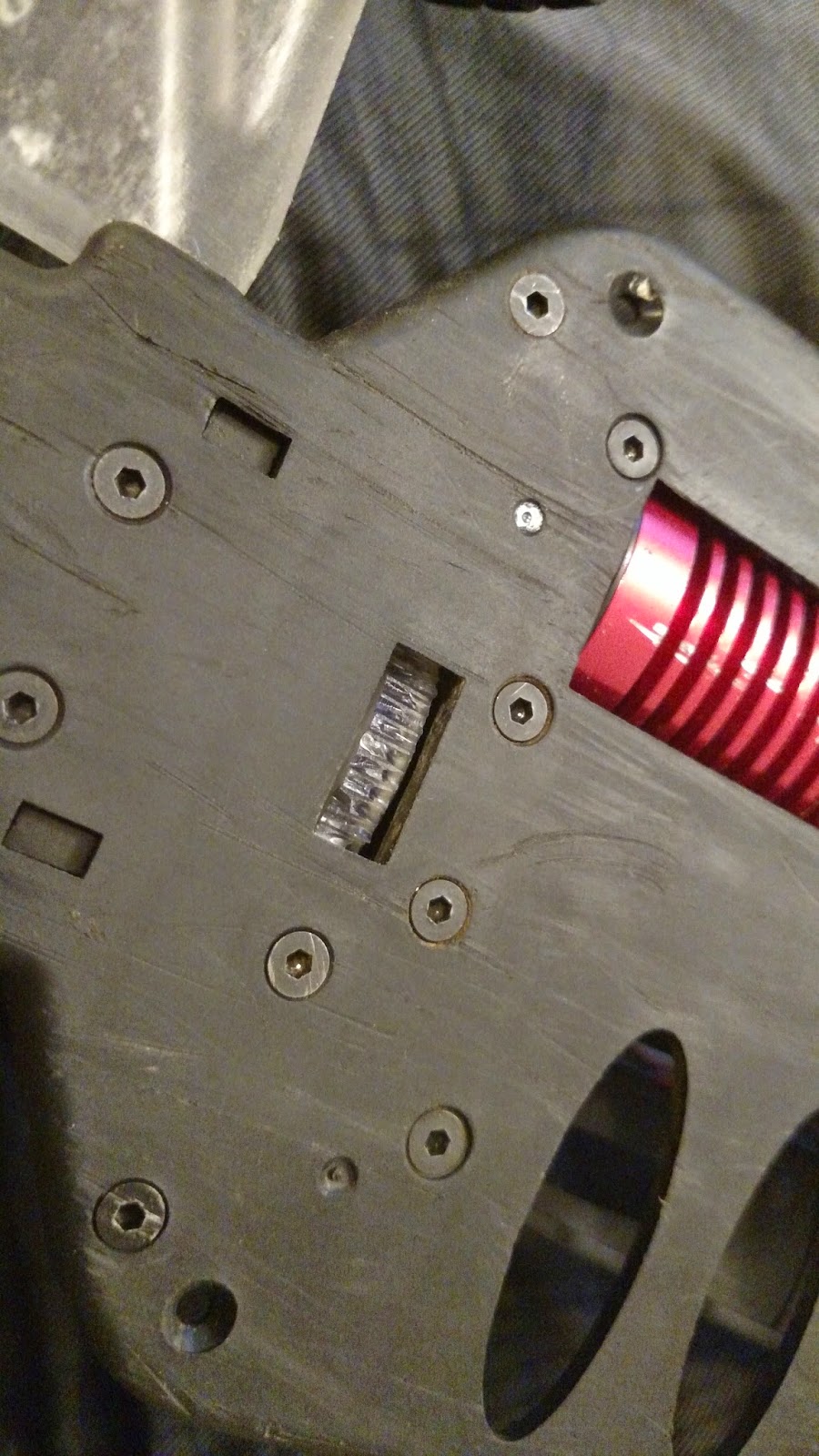 This is the slot in the bottom of the chassis that leaves the gear exposed. The replacement gear is already in the car at this point. I managed to get a face full of gear teeth after a second or two of run time. I didn't have the car on the ground, so the forces on the gear teeth shouldn't have been too high. The gear teeth seem to have shattered. I think this is due to warpage in the gear after it originally printed. The portion of the gear teeth touching the support material had significant warpage. I found this was a problem in my early gear tests, but I decided to try running the gear anyways. I increased the spacing between the pinion and the reduction gear to compensate for the wapage and prevent binding. I also post-cured the gear, which increases the strength and hardness. The post-cure also made the gear more brittle which would explain the shattered teeth. 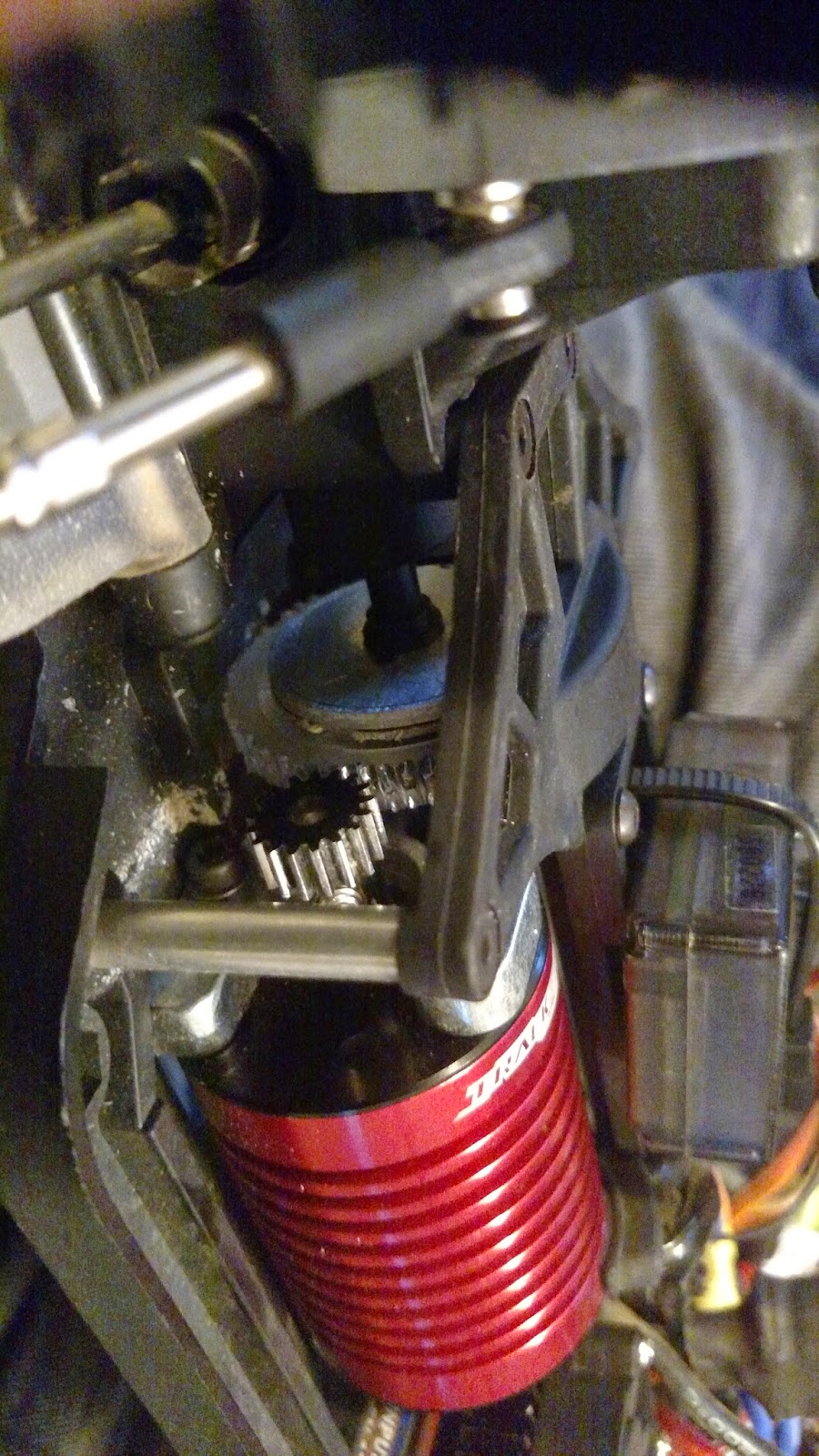 It's hard to get a good image of the gear without removing it from the car which takes a while. I didn't want to take apart the car until I had a suitable replacement ready to test. 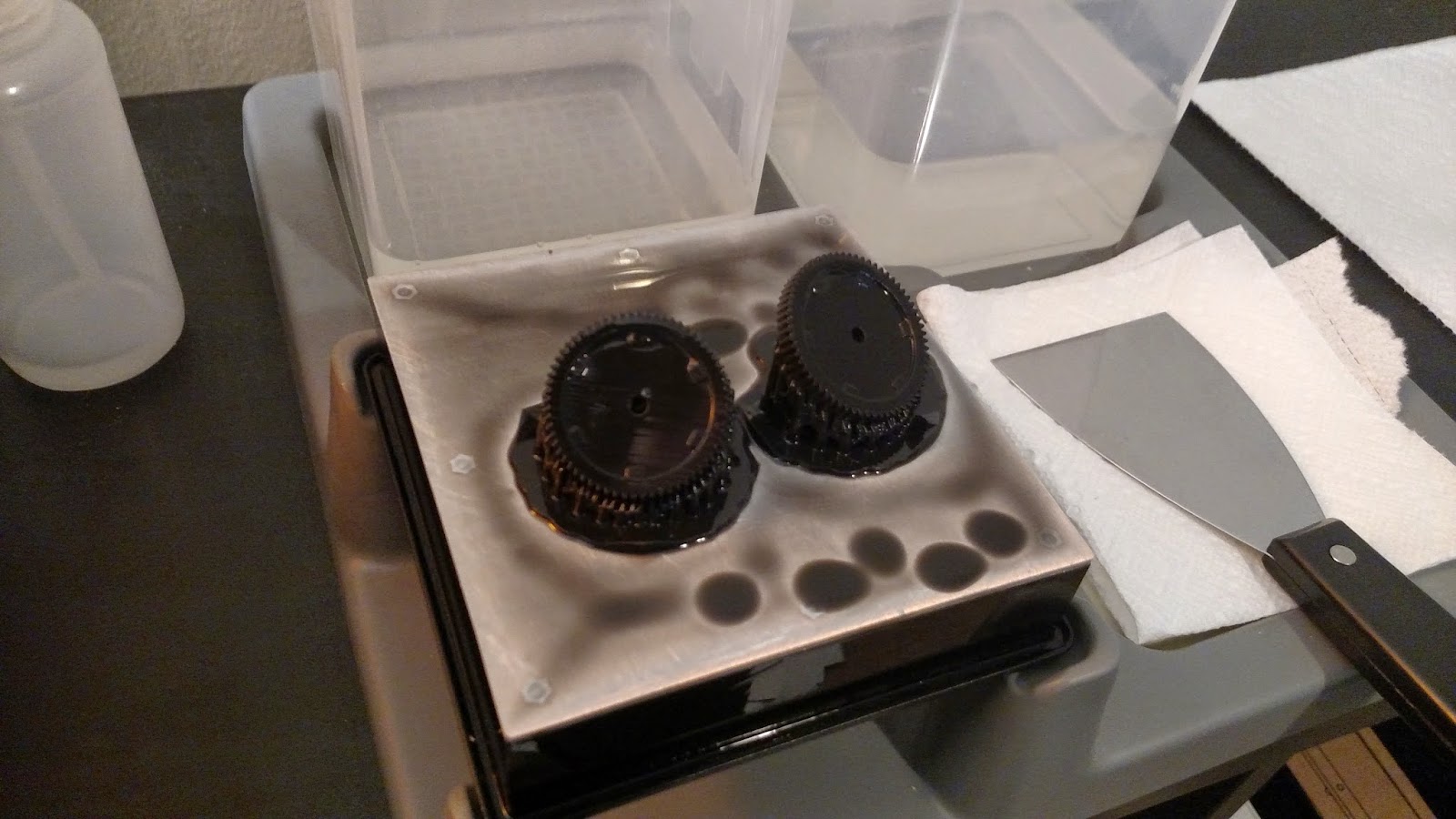 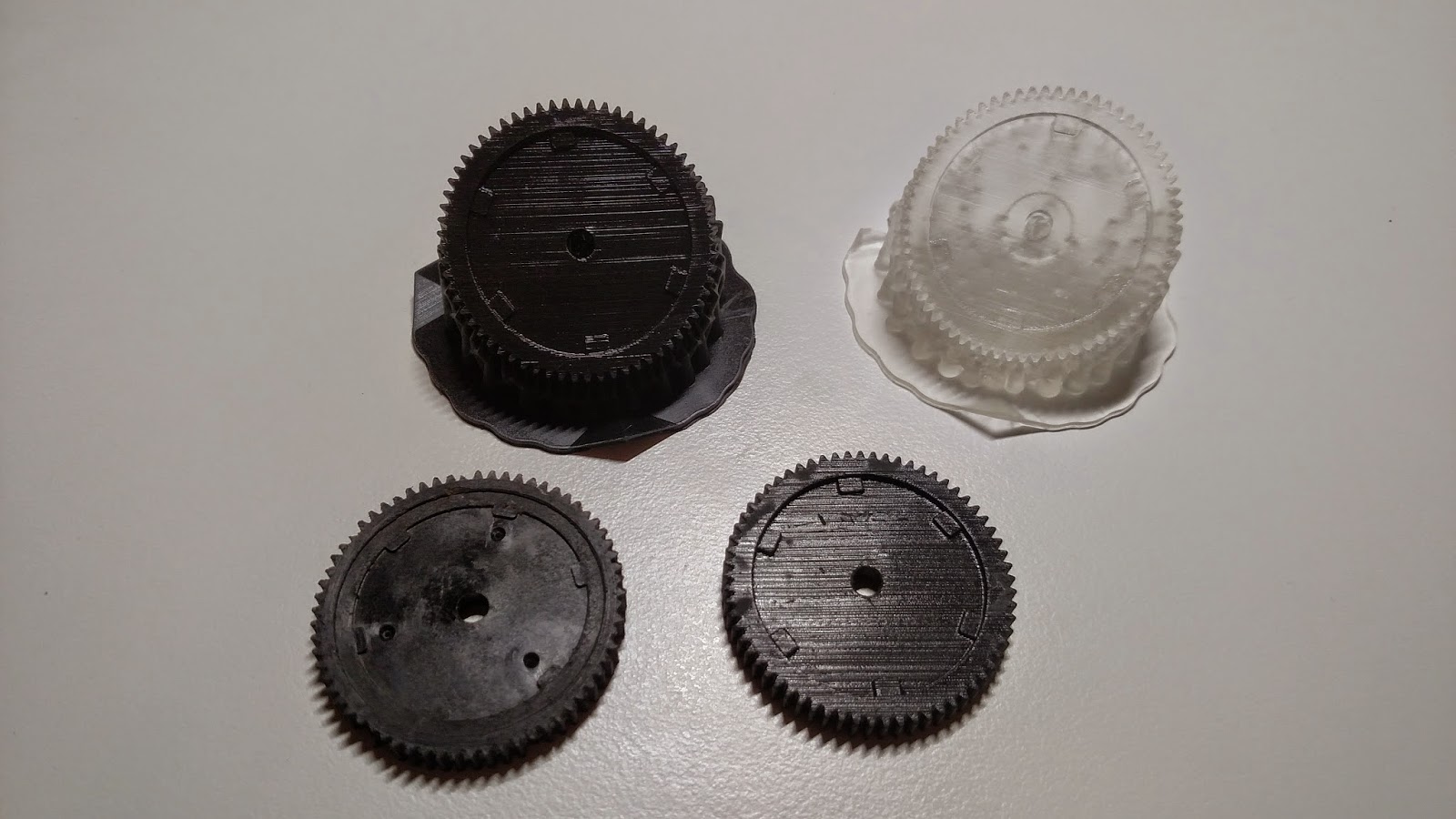 The gear in the bottom left is the original gear. The bottom right is my new replacement gear printed in the black resin. The top two gears are spares that I printed, but didn't release from the support material. 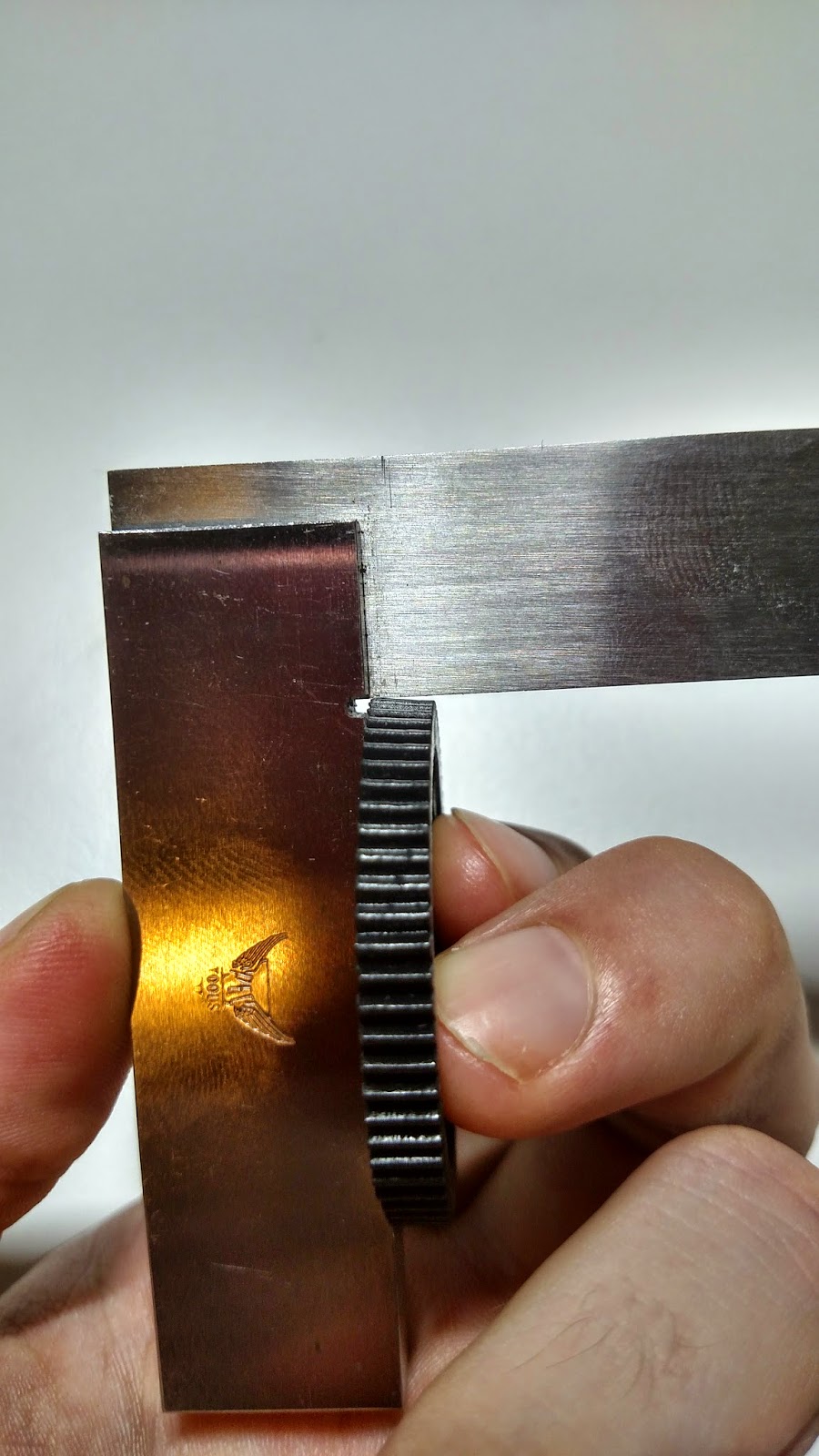 I used a machinists square to visualize the warpage on the gear teeth. The majority of the gear has gear teeth that are square to the faces of the gear, however a small portion (~20%) has slanted teeth like these. This makes it impossible to have a proper gear spacing without binding. I will keep trying different orientations and possibly different gear geometry to avoid this waparge, but for now I may have to order a replacement set of gears for my RC Car.