One of my school projects required a "biconic" nosecone. This type of nosecone has lower drag than a normal round one once it breaks the sound barrier (at least this is what we were attempting to verify). Biconic nosecones are basically described by their name. They look like 2 cones sandwiched together into one shape. We were not able to buy one for the size of rocket we were building, so the obvious answer was to make it!

We found some 2.25" diameter polycarbonate stock in one of the material bins at school. We decided that it would work fine and look pretty cool on the rocket. The challenge with the nosecone was that it needed to have a thin wall throughout its entire length. I decided it was best to machine the inside first and cut the outer profile last. This was the only way I could see how to grab nosecone in the three jaw lathe chuck. I got to use my new boring bar for a legitimate project! Sadly the boring bar really wasn't meant to cut materials while hanging out 5". The boring bar is less than 1/2" in cross section, so it was sticking out more than ten times its diameter. That violates every rule of thumb for cantilevered tools that I can think of. Generally you don't want a part sticking out more than three times its diameter and a tool more than 5 times it diameter. Sometimes you just have to suck it up and use what tools are available, so I used the boring bar anyways.

It made the most horrible chatter I have ever heard on a lathe. Both the polycarbonate and the boring bar were resonating. I tried numerous speeds, feeds, and depths of cuts but it was hopeless.

It didn't look as bad as it sounded, so I machined the other side. 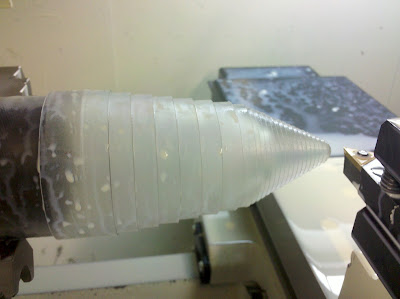 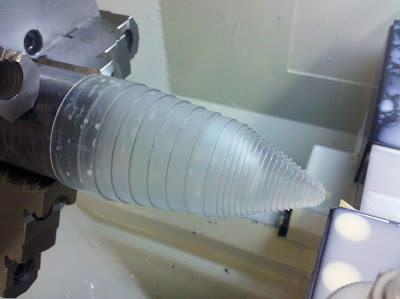 The normal lathe bit worked great on the outside. It was nearly silent and left an almost perfect finish. It was about as perfect as you can get in polycarbonate without polishing. 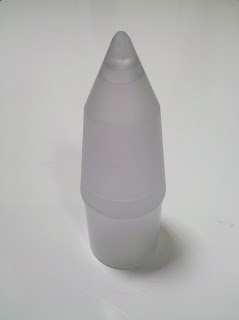