After a long Friday with the CNC router I finally added the clear plastic deck to the chassis of the board. I hadn't worked with a CNC router before this, so it was an interesting experience. The setup was fairly different from what I do for milling. The 12"x40" sheet of polycarbonate was held on one edge by wood clamps, while the other was held down by a 2x4 screwed directly into the router's table. The setup took a few hours, but the cutting out of the board only took a few minutes. Hopefully I'll be a bit quicker with the next part I do on the router. Now I just need to finish the under glow and the board will be complete! 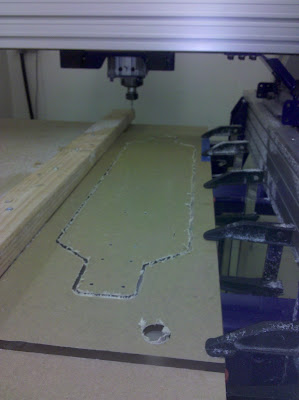 This was right after the cutout finished. The circle in the bottom of the board was a test cut. The default feed rates were a bit too quick on the machine. Although it cut out the circle just fine, the noise made by the router attracted a lot of attention. The high speed motion also risked the machine losing its position. Drilling the holes took forever because the router's spindle did not want to go below 6000RPM. At this speed the drill bit created a bunch of "stringies" as I call them. I had to pause the machine between every hole in order to remove them from the drill bit. Otherwise they would have melted large areas around the later holes in the deck. 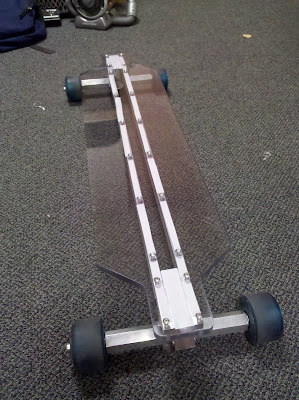 I temporarily added some paper between the rails and the board in order to prevent scratches. I'll remove these once I get a clear protective film for the board. Until then the board will be covered in blue tape! The blue tape is kind of ugly, so I won't post a picture of it.
Posted by JB at 5:00 PM
Email ThisBlogThis!Share to TwitterShare to FacebookShare to Pinterest
Labels: CNC, Deck, Longboard, Polycarbonate, Router