During testing we discovered that the belt drive used to transfer torque between the motor and spinner was slipping pretty badly. The belt was designed to slip some. During an impact, the spinner stops almost instantaneously. The belt was meant to slip under this condition to protect the motor shaft. We heard from other teams that used the same motor for the same application that their shafts sheared when chained to the spinner. Our concept was good, but the implementation was bad. A belt tensioner was added between testing and competition. It helped, but it didn't fix the problem. We also added a belt dressing which was supposed to make it grip better. In the end it just made the belt disintegrate much faster. 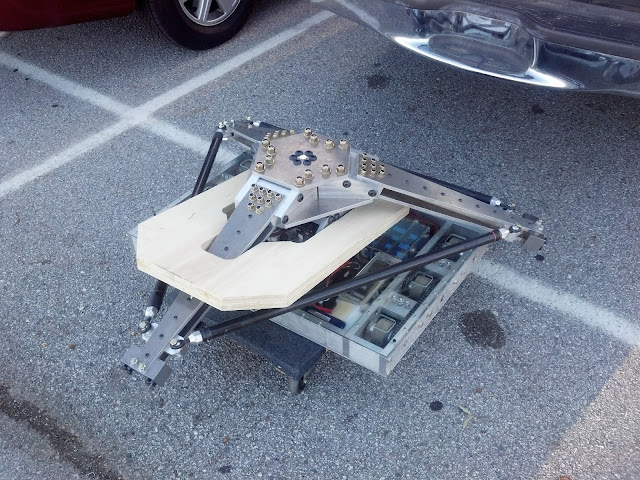 Here's Robespierre right before competition. It looked pretty sweet. The others in our division saw that too. They also warned us that the first tournament would be a "learning experience"... they were right. We went up against two wedge bots. Since the belt was slipping the spinner wasn't able to gain enough kinetic energy to take out the opponents. Just like any vehicle, it can only takes one critical part to cause the whole thing to fail. 99% was good, but that 1% belt prevent it from being amazing. The carbon fiber arms broke off as we had guessed they would. otherwise, the robot received nothing more than a few scratches. We were proud we held up to the beatings delivered by the other robots. Sadly I don't have videos because I was part of the drive team.

A few things we did worked amazingly well. The brushless drivetrain saved a ton of weight. It was a risk that we took because it was an unproven technology in the heavy weight class, but it really gave us an advantage in building our robot. The magnets were also a big boost to performance. Our first match had the magnets on. The robot was firmly planted to the floor at all times. Our last match we didn't have the magnets (the judges were less than amused when a magnet fell off and adhered itself to the arena floor). That match we were jumping up in the air during impacts. It also let us get wedged. 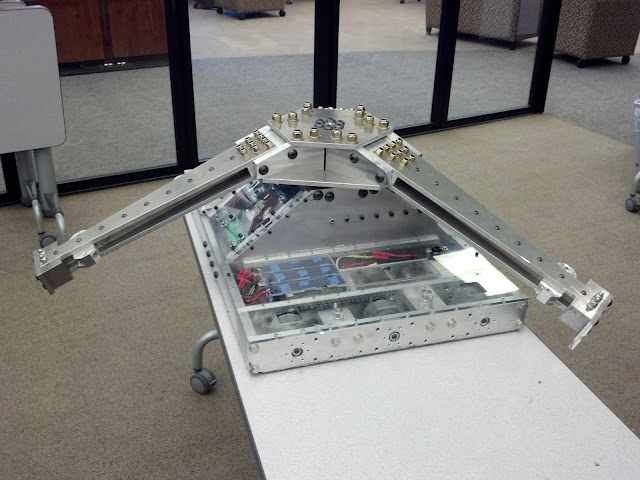 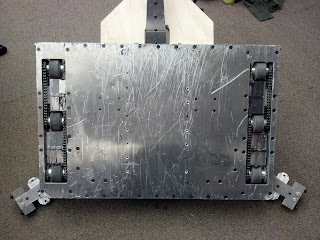 The belly pan got fairly scraped up. I think it looks better with the scratches... it's battle tested!

I'm not really sure where to go with the PROS and CONS list.

CONS
-It's only use is breaking stuff

Overall the biggest things we need for the robot are improvements. There are minor fixes that need to be completed before the next competition to make it a real competition. Some are small changes like changing out the belt with something that grips better. Other changes are increasing the ground clearance and making a better magnet system (so they can't fall off during a match).
Posted by JB at 7:10 PM
Email ThisBlogThis!Share to TwitterShare to FacebookShare to Pinterest
Labels: Combat Robot, Competition