It's been in this state for over a month. I'm slowly coming to the sad realization that its going to be at least another month before it gets past this point. The good news is that I have it assembled and playing even though I'm missing most of the electronics and most of the pieces that make up the body. The bad news is it's somewhat difficult to hold while playing in it's current state.

The last big piece I needed to make it function was the main body piece. I was very fortunate to get access to a machining center. Always take up opportunities to make parts on a real CNC. The body was 90% machined in 2 setups. One setup to get the top and one to get the bottom. While getting the tool paths generated took some time, the machine time was a few minutes for each side. That's pretty fast considering the amount of material removed. Auto-tool changers and flood coolant really make aluminum parts fast to machine. 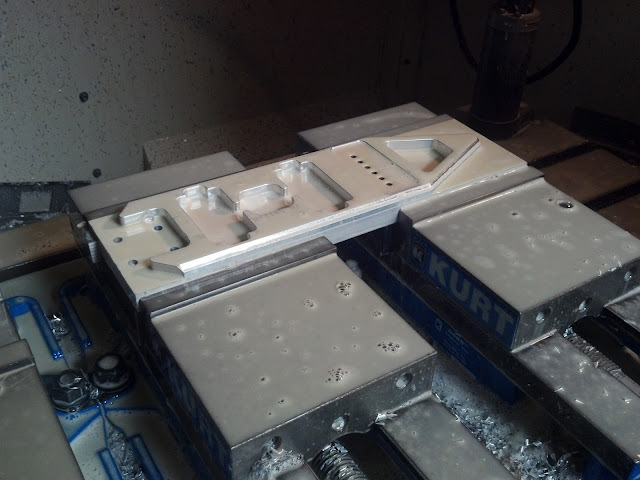 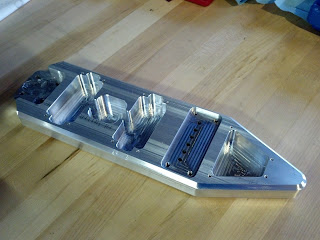 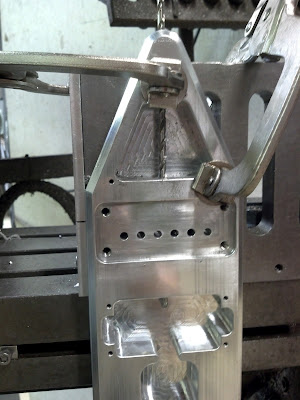 This is one of my favorite set-ups of all time. I had trouble coming up with a good way to run the wiring from the pickups to the electronics area without the need for a large plate to hide the slots for the wires. My best idea was to drill a hole straight through half of the body. I got to use a 12" long .1875" diameter drill bit. It wasn't really any different from using a normal drill bit... I just thought it was cool. Once I get around to finishing the body I'll counter bore the end of the guitar body so the connector will seat cleanly in the end. The end result will be a very clean looking electronics setup, but it isn't what I would call friendly to machine. 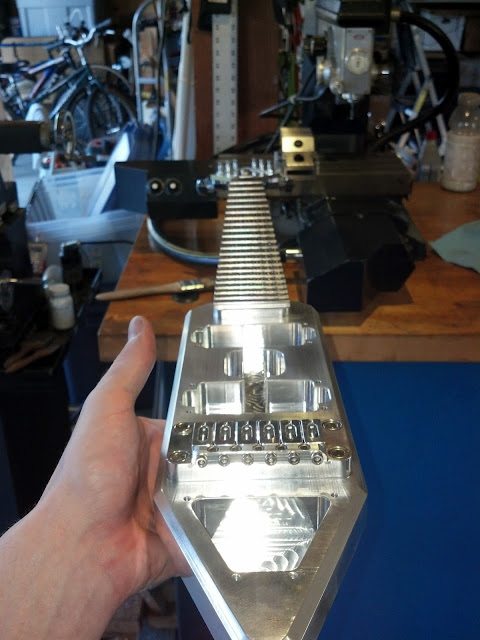 Everything bolted together nicely. I chose to run the lightest gauge strings I could find at my local music store.     I strung the guitar over a month ago so I honestly don't remember which size I used. They took a lot less tension than I had expected. The neck can easily handle thicker strings but I figured I would try out some thinner strings and see how they work with the incredibly rigid aluminum construction. 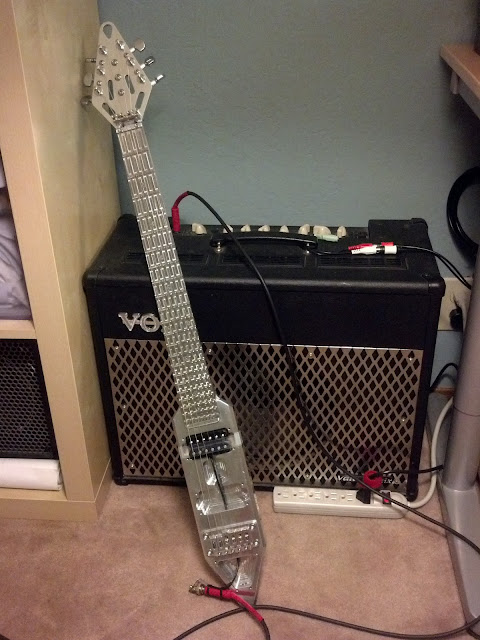 Alright... It doesn't quite look like a guitar yet, but its getting there. If you only look at the neck you couldn't tell it's incomplete. The main reason for assembling it without all of the pieces, aside from my lack of patience, was to make sure it sounded decent. The all aluminum design is kind of risky. Most guitars are made from wood, which is a dead material. Dead materials make a thud when hit. Aluminum will ring for quite a while when it isn't damped by something like a hand. Tap-testing a number of the guitar parts including the body made deafening rings that lasted for minutes. After assembling everything the guitar became dead. My guess is that it's due to the bolted joints and the dissimilar materials. In any case it doesn't resonate badly. 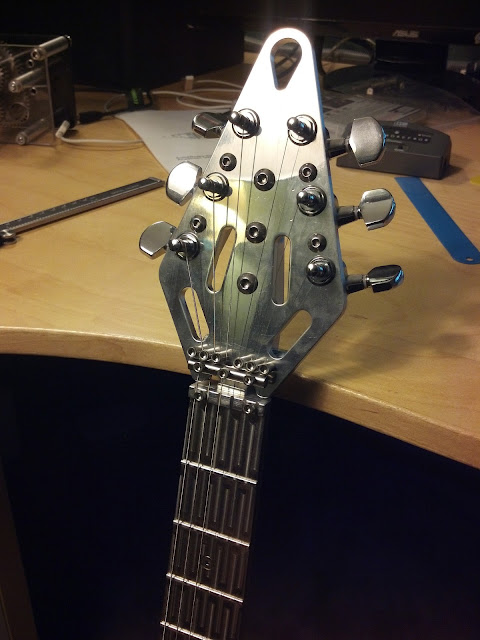 One of my favorite parts of this guitar is the string alignment system. I had to align the strings before passing over the nut. My system uses quite a few stainless parts, but it looks pretty cool and seems to provide near-frictionless alignment. 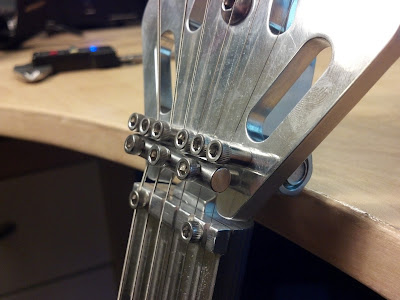 Overall the sound of the guitar so far is pretty amazing. It has a brighter sound to it than my other guitars. My wooden guitars sound muffled. Since this guitar has different pickups, electronics, and strings along with the aluminum construction I don't know what makes the difference. I do know that I like this guitar's sound better than my other guitars. I've been playing it for over a month now and I just can't will myself to play my wooden guitars. The metal neck has some serious mass to it. When playing solos the wooden guitars can't compare. The thinner strings probably contribute to how easy it is to play, but the solid feeling when I press down on the fret board really makes a big difference as well. The wooden guitars just feel light weight and cheap in my hand. The best way to describe the feeling is holding a solid metal product in one hand and a plastic one in the other hand. The metal almost always feels higher quality. I'm sure most people that play a wooden instrument fear that a neck might snap if it's dropped or mistreated. Not with this guitar. If someone were to try to smash a guitar like this at the end of the concert they would be left with a broken stage rather than a broken guitar.

Pros (so far):
-Brighter sound
-Quality feeling
-Easier to play fast (may be due to the strings, but the solid feel definitely helps.)
-Unlikely to break

Cons (so far):
-Hard to hold (it's missing most of its body)
-Lack of adjustability (It currently has one pickup directly wired to the amp. No volume or pickup selection yet.)
-Thermal stability. The guitar has a warm-up period where it goes out of tune until you play it for a bit. The tuning goes sharp as I play, so it can't be the strings slipping. Since the strings are steel and the neck is aluminum, the neck should expand faster than the strings with an increase in temperature. This should put more tension on the strings and raise the pitch. I haven't confirmed this as the reason for the tuning shift, but I can't come up with a better reason given the conditions.

I'm pretty excited to finish this project up and see how others feel it compares to normal guitars.