I've always wanted to build a Hexapod. They look pretty cool with all of the legs moving in sync. They can also be used as a desktop toy, unlike my RC car, which is basically an outside only toy. The biggest problem with hexapods is they are really expensive. A proper hexapod requires three degrees of freedom for each leg. This ensures that the leg doesn't need to slide on the ground. The three degrees of freedom per leg and six legs require a hexapod to have at least 18 servos. The servo cost adds up fast and had previously discouraged me from building a hexapod. Recently I came across micro sized servos (HXT900 9g servos). These servos cost about three dollars each. Even with 18 servos that still isn't too expensive compared to typical on brand servos that cost about 20 dollars each.

I wanted to build the hexapod around my new 3D printer. The first thing I decided to do was integrate the servo splines into the legs themselves. After a number of test prints I was able to confirm it is possible to create micro size servo splines with my 3D printer (Form1+). I also wanted to keep the design minimalistic and avoid over complicated joints and leg segments. 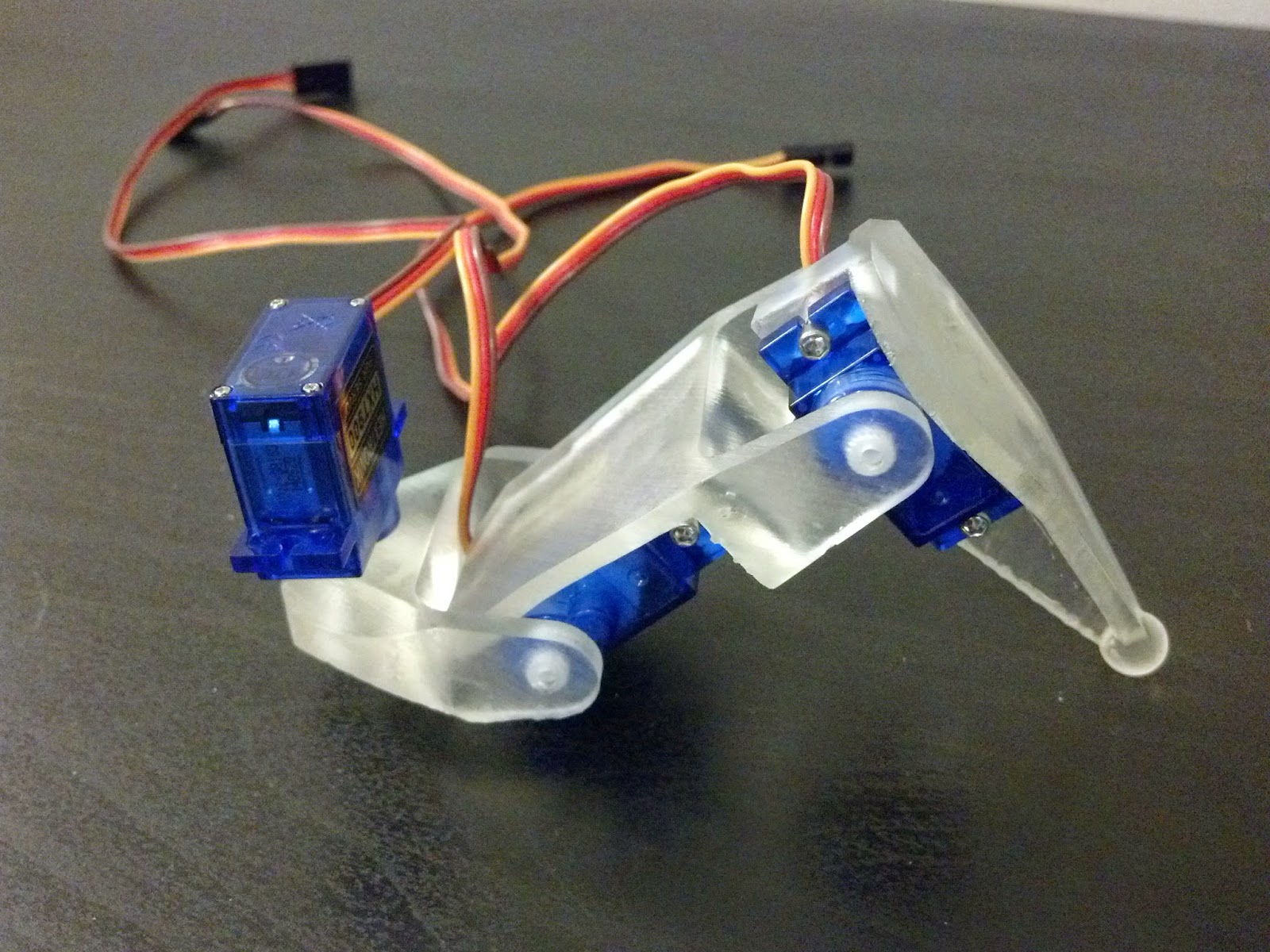 I bought three servos before I committed to building the hexapod. I printed and assembled one leg to ensure the servos would be strong enough to drive the leg. I also wanted to test the tolerances on the servo splines with multiple servos. This image shows the leg prototype, The only change I made to the leg design was an increase in the depth of my logo. 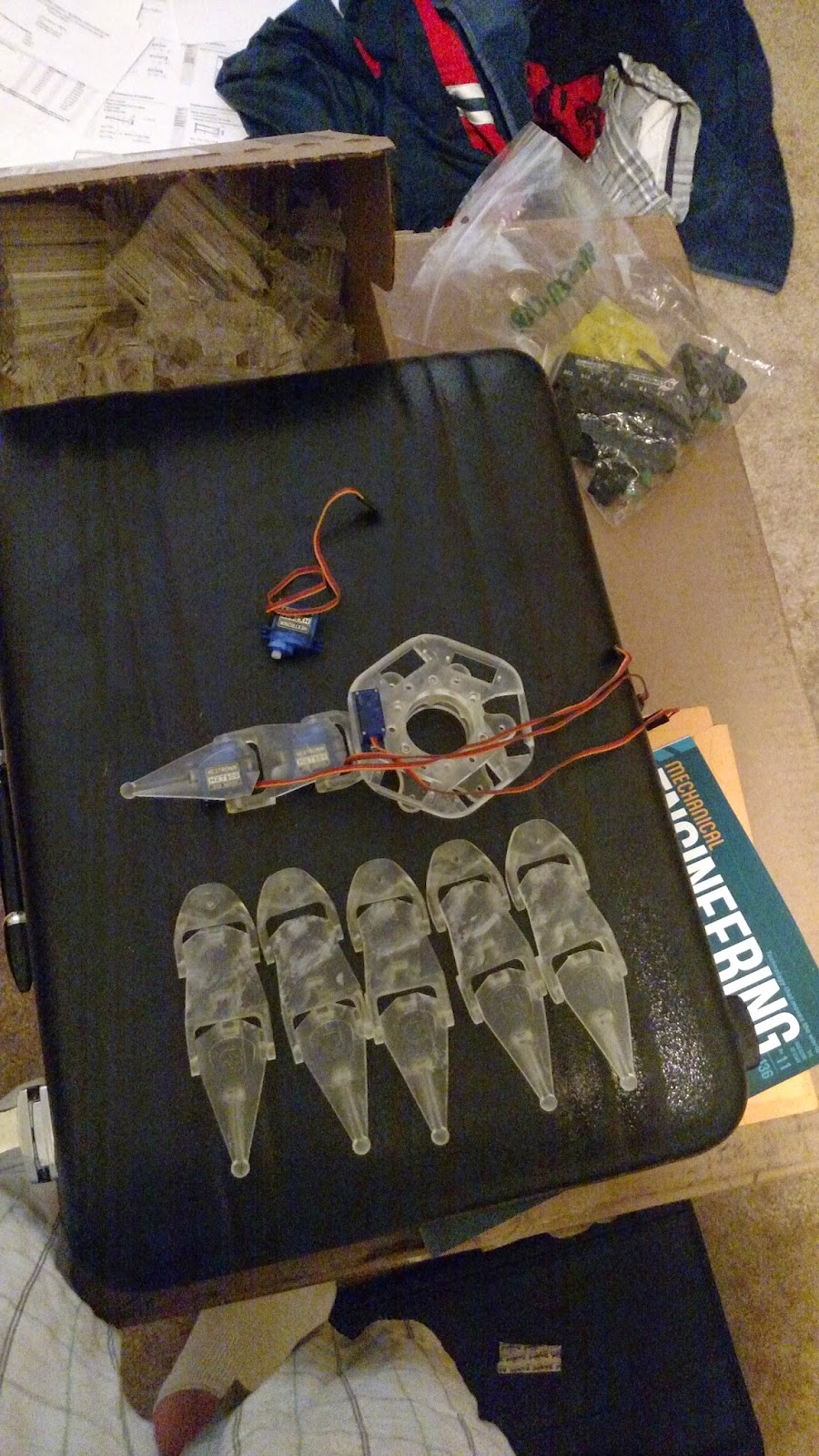 This was the first "production" run for my 3D printer. I had to make six copies of each leg part as well as the body section. Aside from one print failure (on the main body servo mount plate) everything printed perfectly. I literally couldn't make these parts through machining given the orientations of the splines and the shapes of the parts. 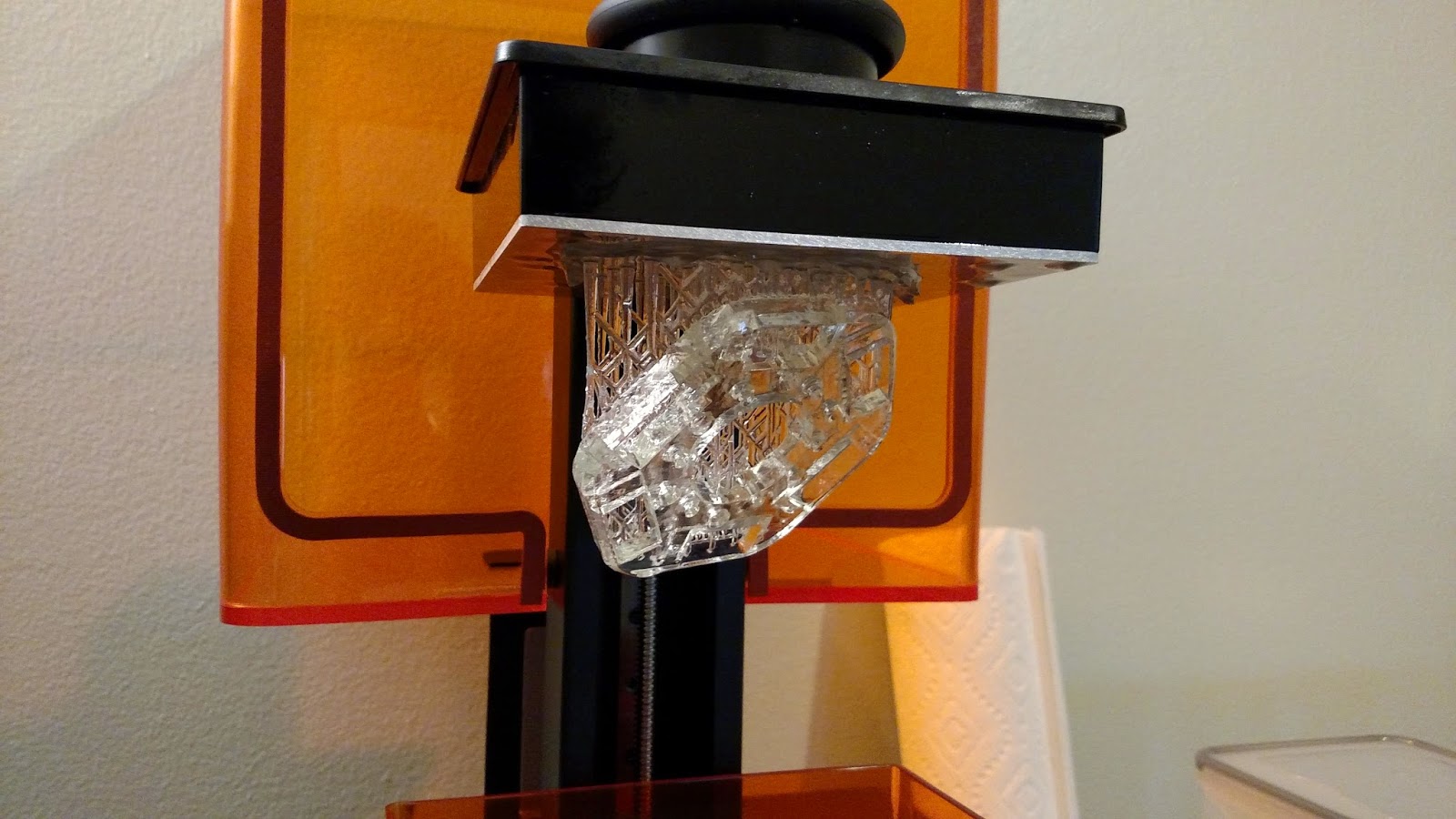 This is the body piece ( the one that printed correctly) as it came off of the printer. There was an update to the printer software that dramatically reduced the material wasted in the support structure for the parts. 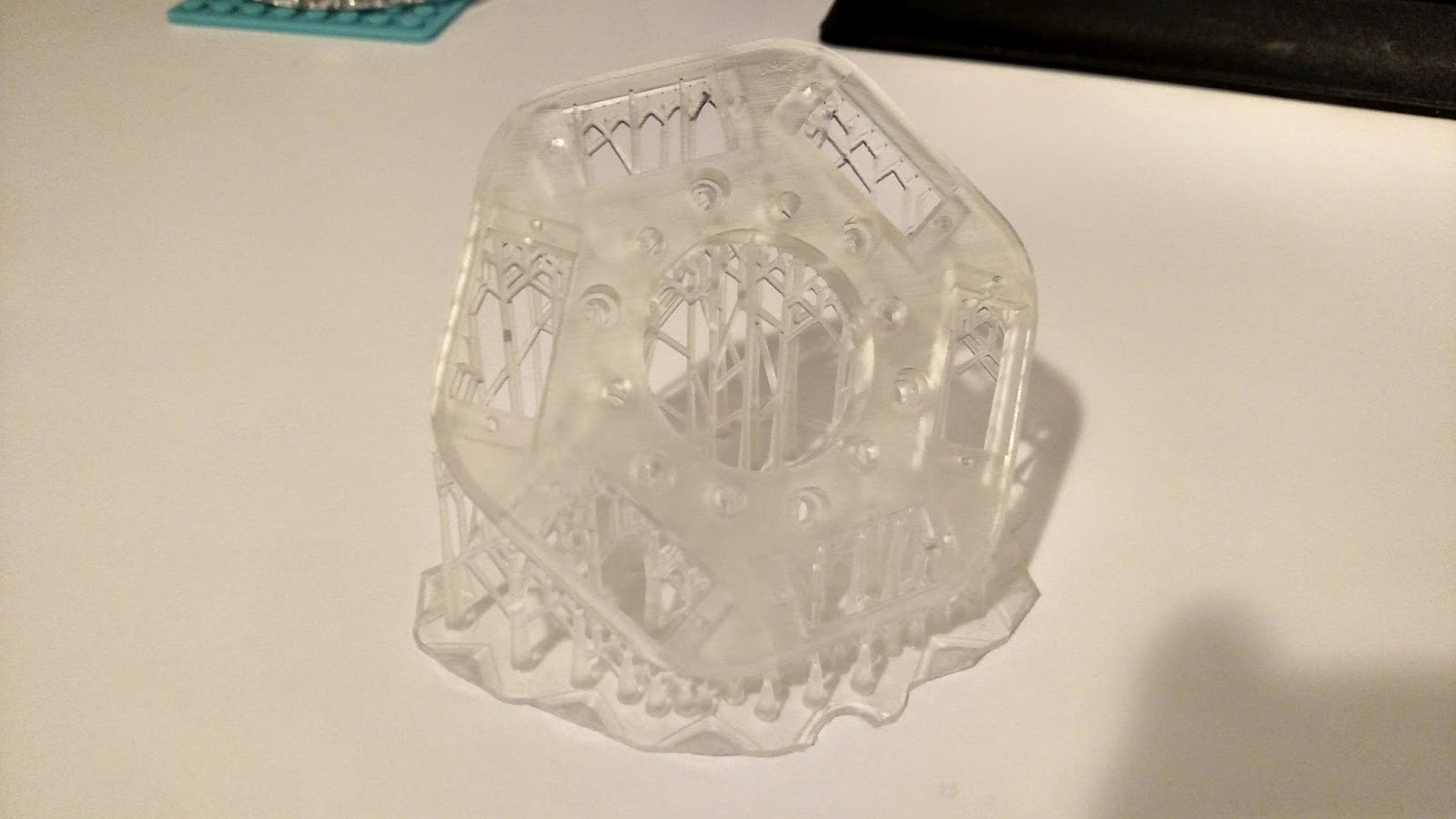 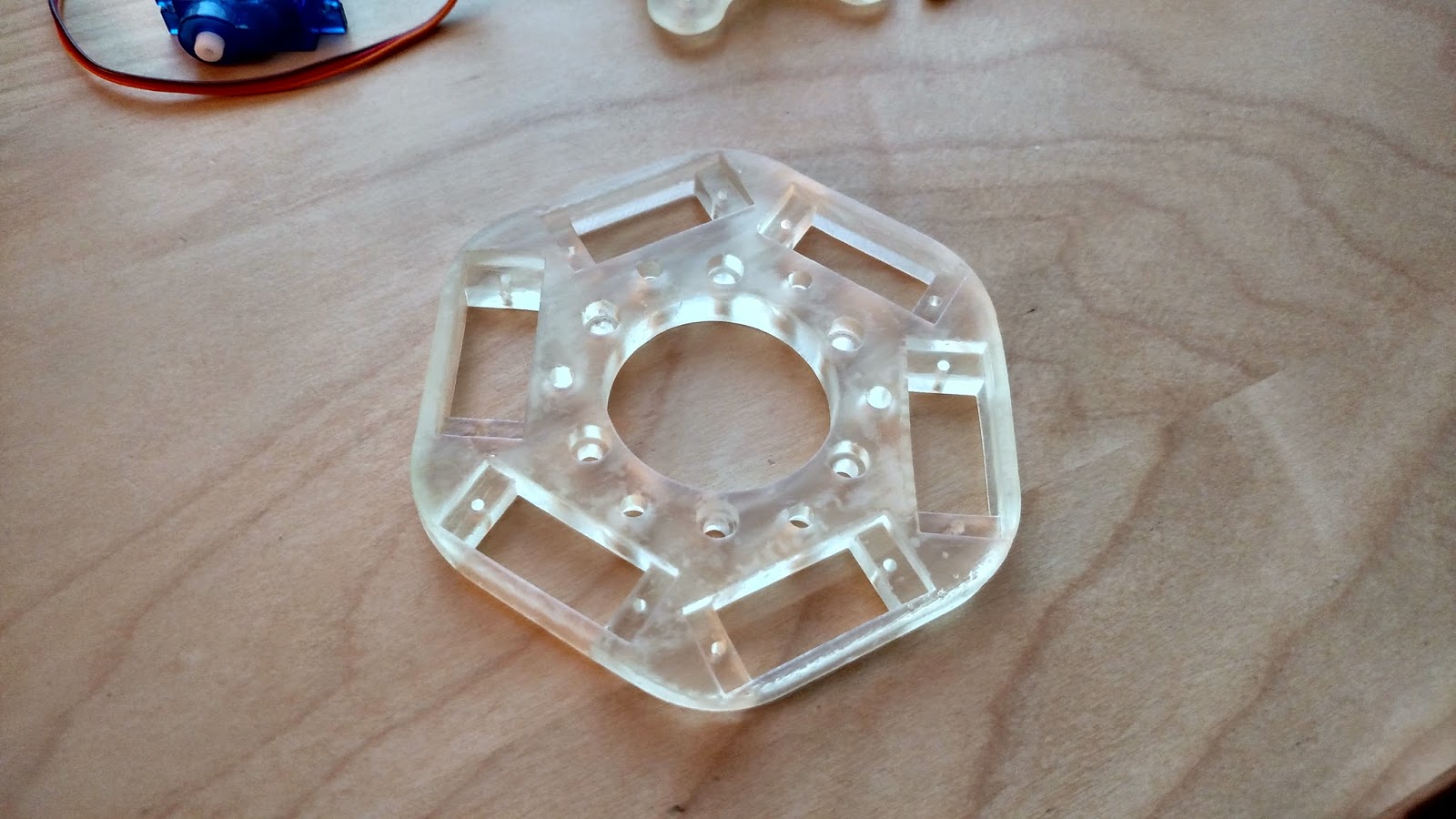 The final part looks pretty clean. All of the dimensions seem to be within tolerance for the hexapod. There is some warpage in the part that occurred after the post curing, but it shouldn't prevent the part from being usable. 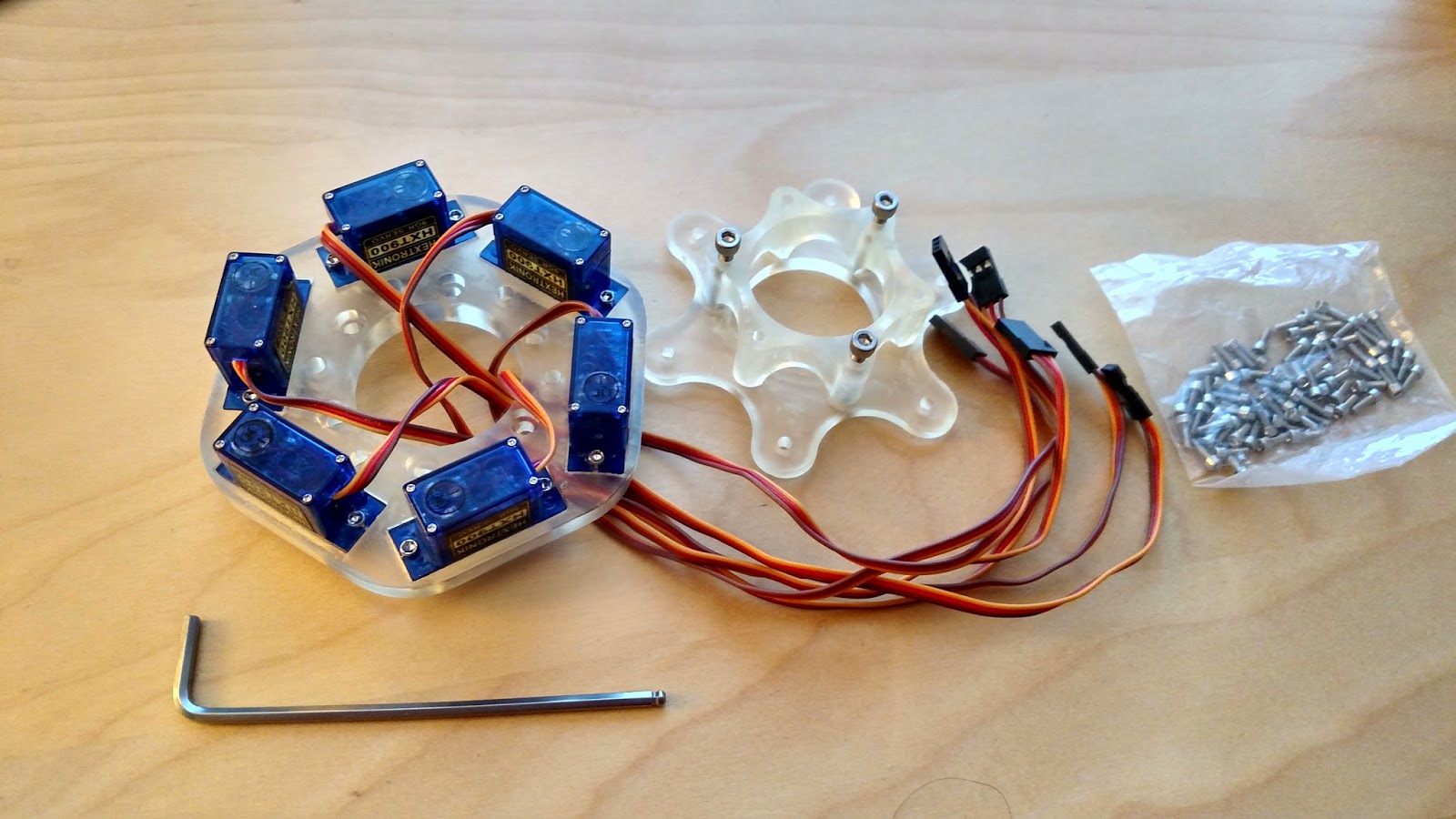 Each servo requires two 2-56 screws to be threaded into the frame. My hand got pretty tired trying to screw all of the servos into the mounting plate. Each servo fit nicely into the plate. 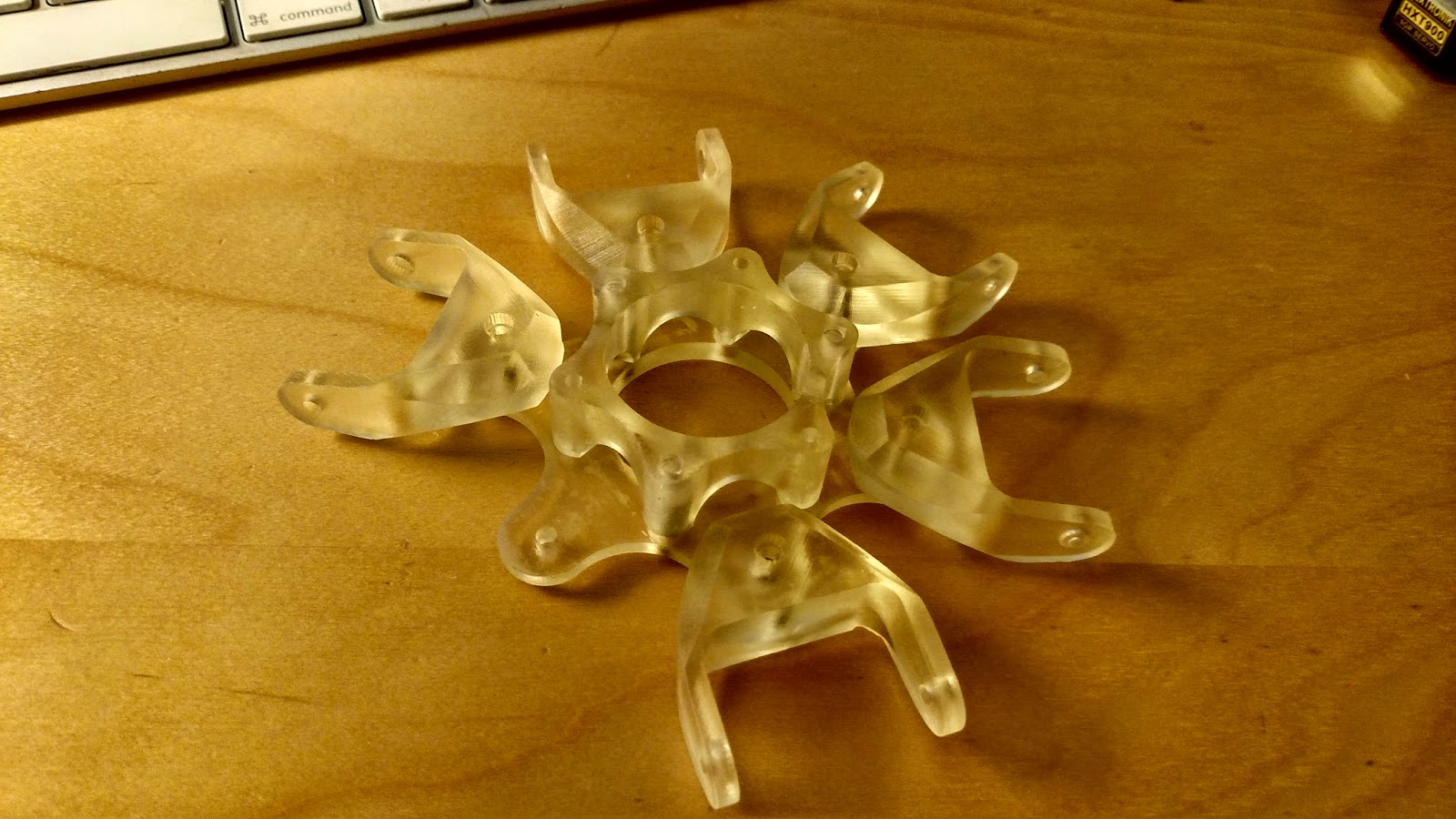 I decided to try fitting all of the pivots into the lower central support plate. It was fun getting to see the hexapod come together. 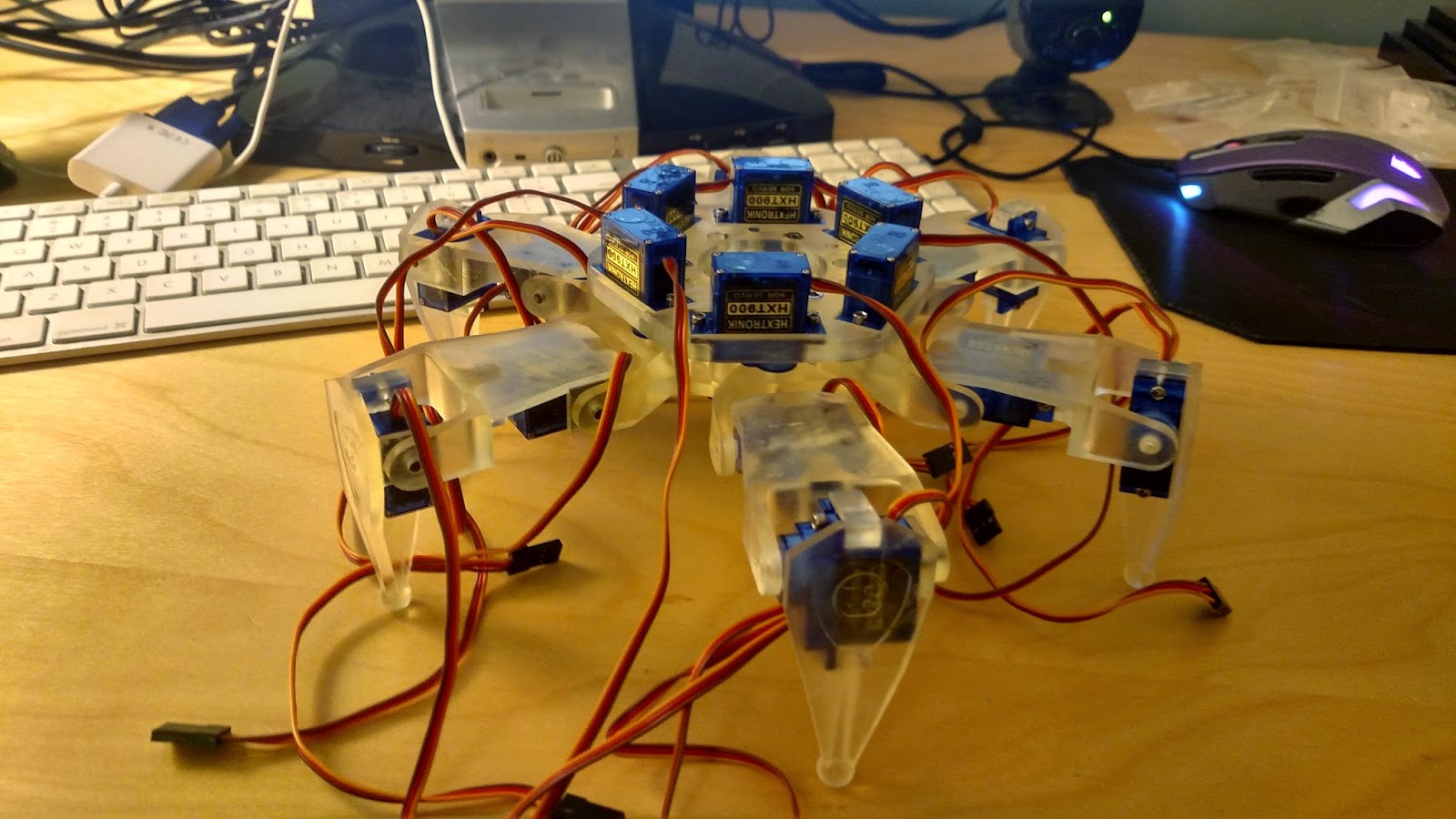 This was the first time the hexapod was fully assembled. I knew the wiring would be an issue, but I didn't realize how messy the hexapod would look without proper wire management. 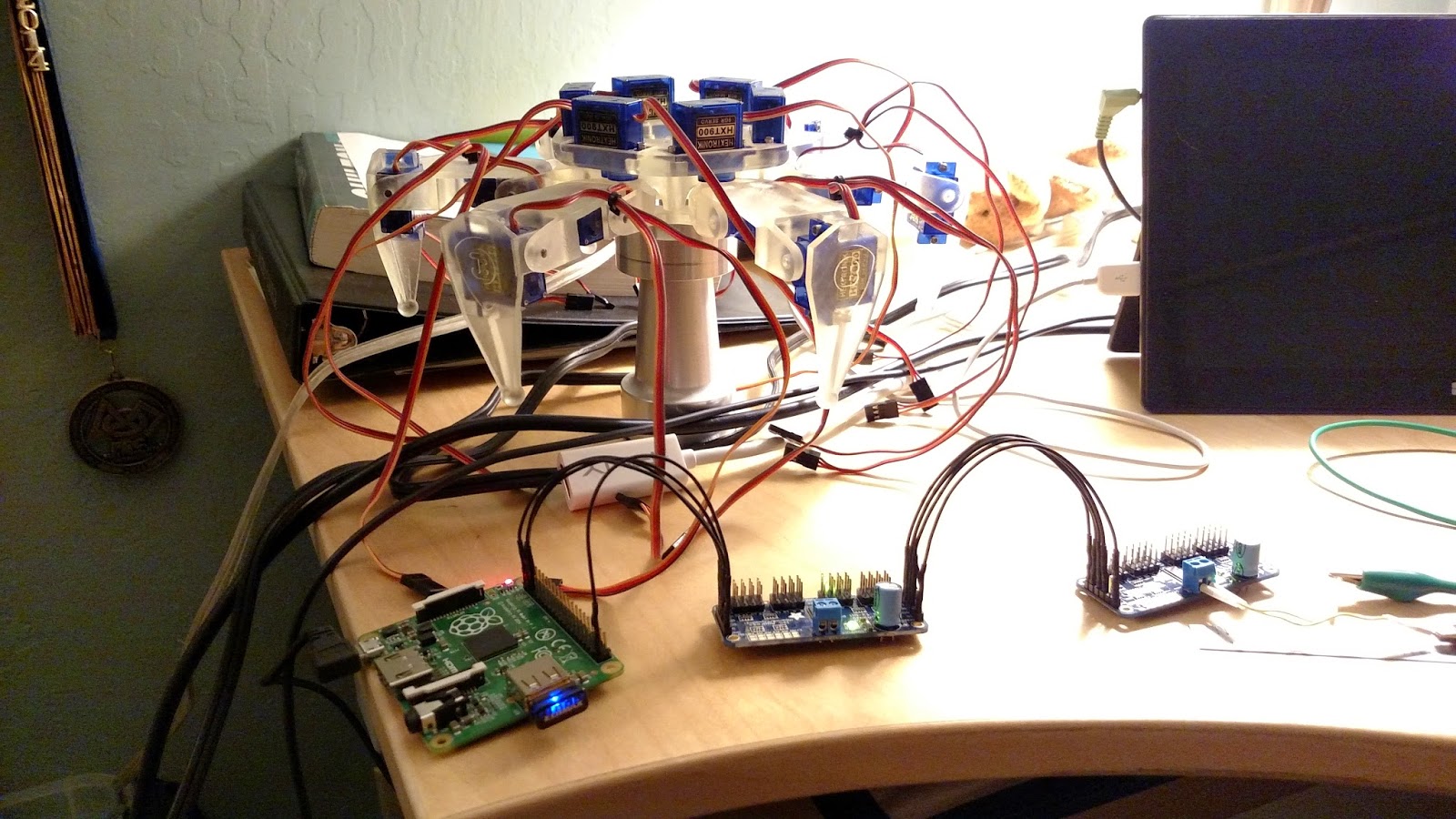 Here is my programming testing setup. I was at my house for the winter break and no longer had access to my 3D printer. I had CNC access but I didn't particularly want to get covered in chips as I usually do when machining. I used a raspberry pi model a+ as the controller. This raspberry pi is the smallest one currently available. I wanted to run the hexpod with linux and python because it makes the programming easier. The hexpod currently connects to a computer over wifi which was really easy to do and should be a convenient way to control the hexapod. The two blue boards are PWM driver boards from adafruit. Each board can drive up to 16 servos ( I needed to drive 18 so I had to get the second board). The boards are controlled with an I2C interface. This means I need a minimal number of pins from the raspberry pi to control all of the servos. It helps to keep the wiring from being a mess.


Here is an early motion test. I programmed the legs to look like they were walking. I still needed to calibrate each servo and complete the actual leg motion program. This shows the hexapod moving its legs near the peak servo speed. 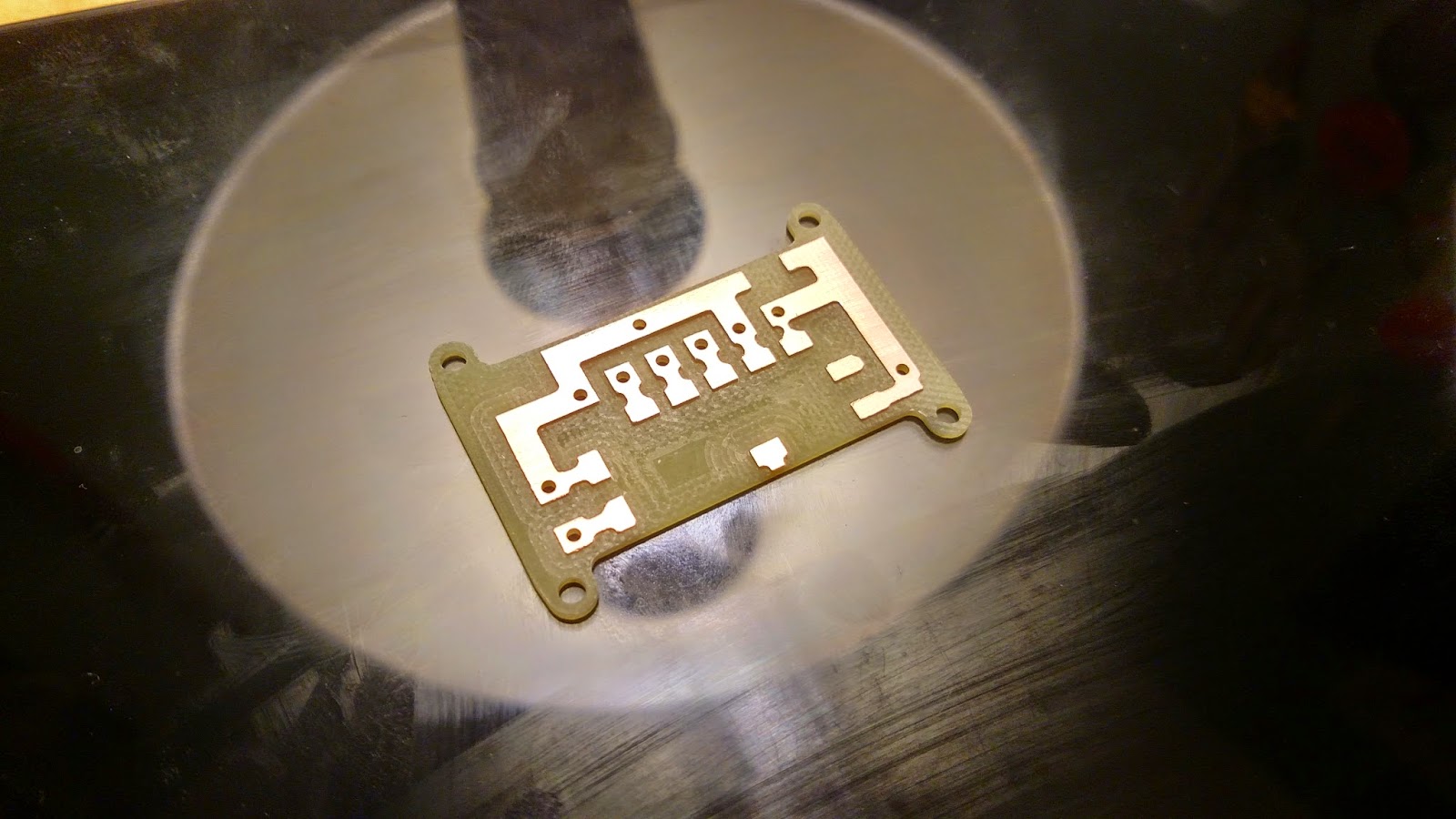 This was the first PCB I milled on a proper milling machine. I've always had access to a dedicated PCB mill, so coming up with my own milling procedure was fun. I drew the circuit board in SolidWorks so it would be easy to generate the G-Code for the CNC. A proper circuit CAD program like eagle probably would have been a better choice. 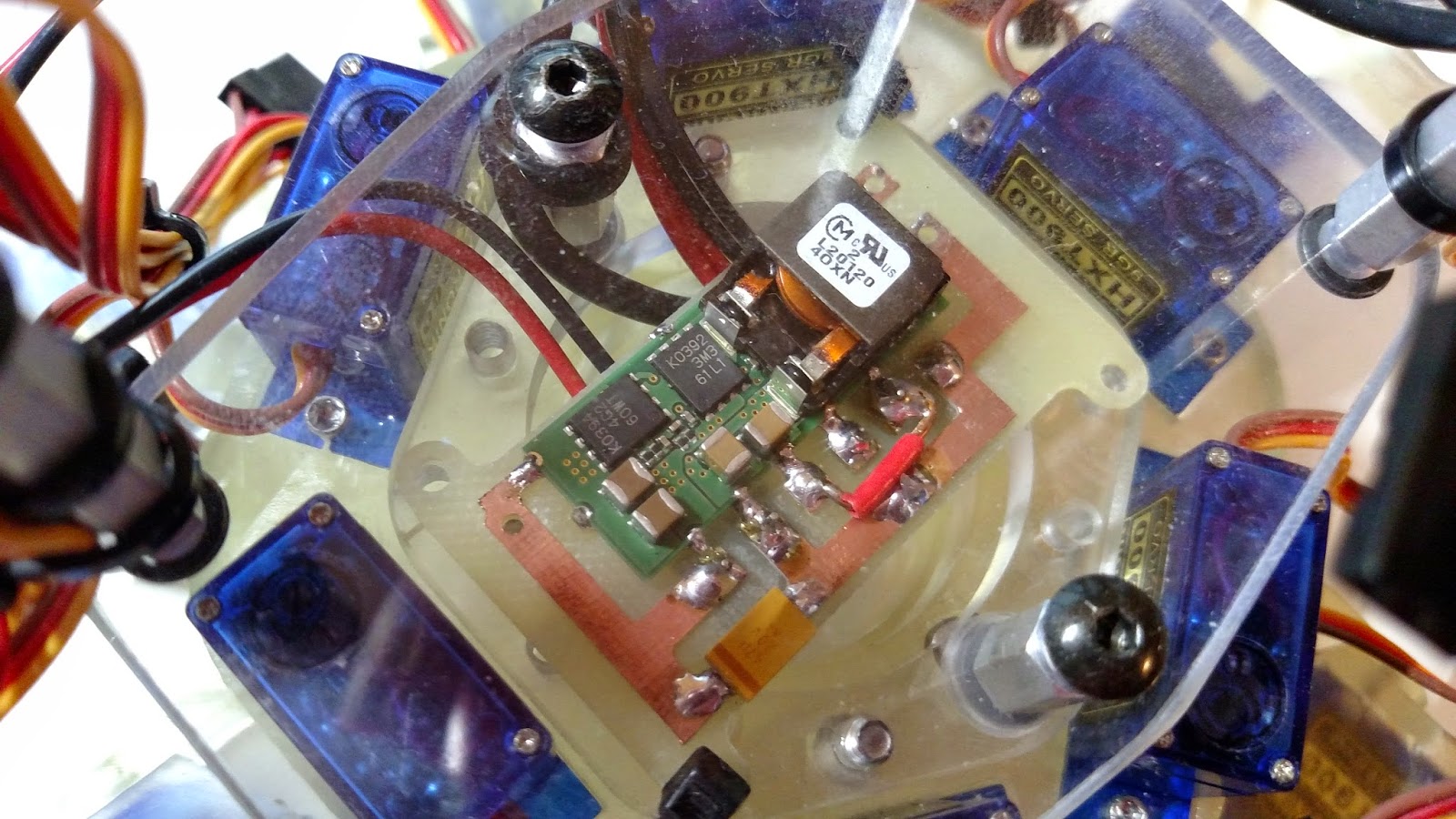 The PCB I milled was for the hexapod's power supply. This supply is capable of driving up to 20A at 5.5V. I wanted to drive the hexapod with a 7V battery, but the servos and raspberry pi wanted 5V. Each servo doesn't draw very much current, however the combination of all 18 which could all be running at full torque at one time would overwhelm most power supplies. I decided to go with the 20A supply to ensure there would never be a sever voltage drop that could shut down the raspberry pi. 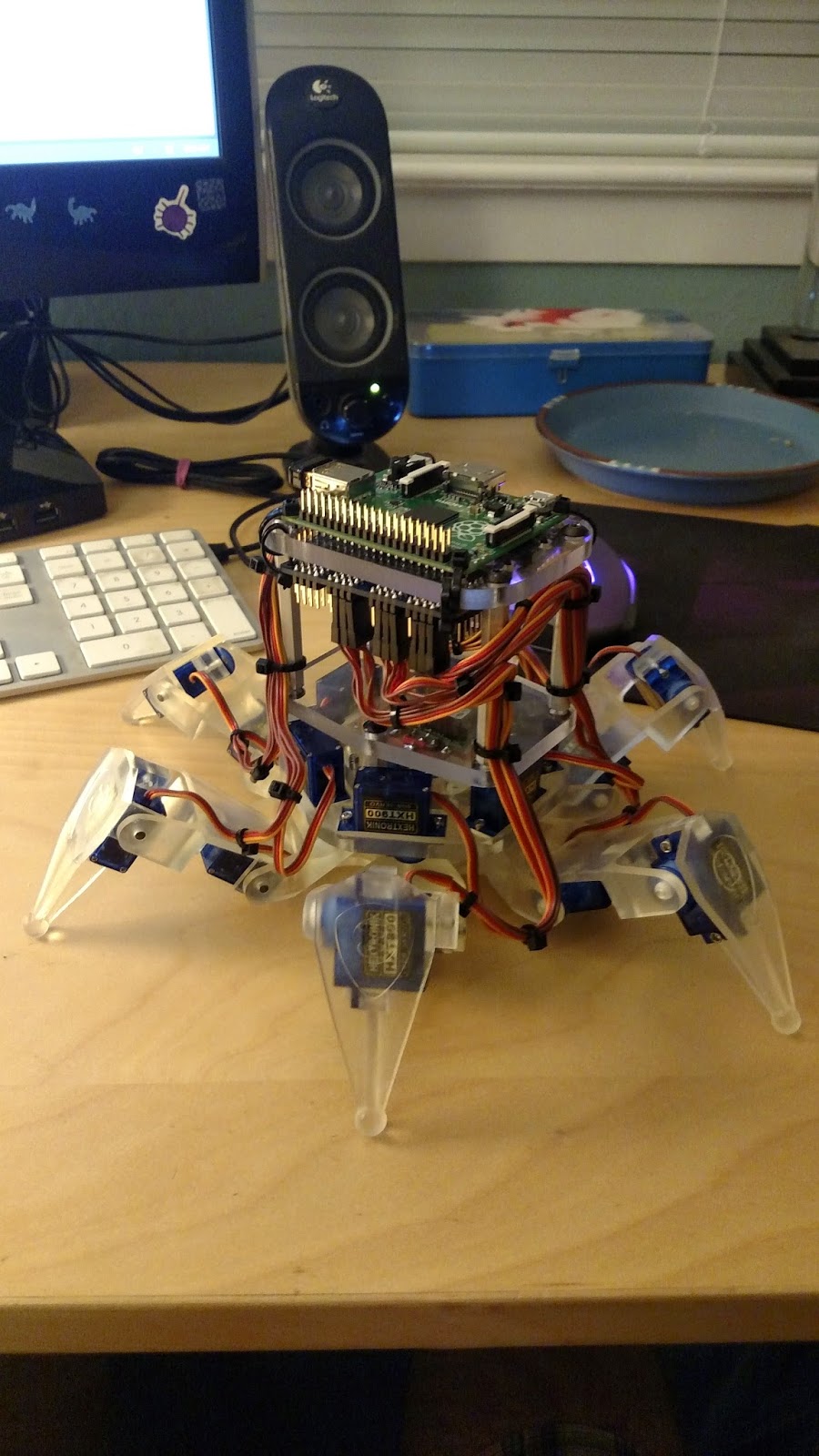 Here is the final hexapod assembly. I ended up milling three plates from polycarbonate to create the electronics mount. The electronics are all held in with zip ties. I would have used screws, but I didn't want to make the standoffs required to mount the electronics with screws.

Unfortunately during testing I managed to break three servos. Shipping the hexapod back from break caused another four servos to die. All of the servos broke at the same internal gear. I haven't been able to finalize testing my leg motion code without a fully functioning set of legs . I chose not to use an existing set of code for the legs because I was excited to create my own algorithm from scratch. I need to rethink my servo choice and look into getting slightly more robust servos. Currently I am looking at using metal gear servos that are around five dollars each. I'm sure the hexapod will be up and running quickly once the new servos are integrated into the design.