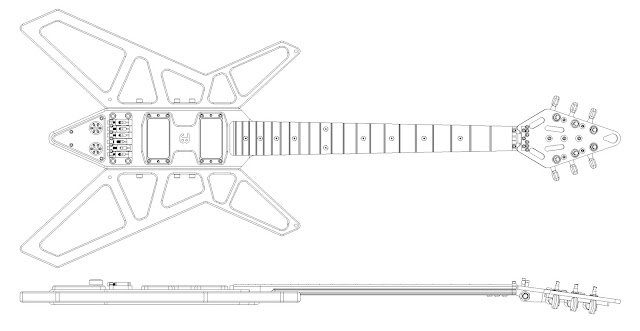 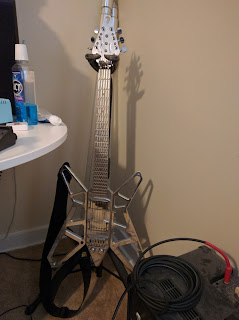 The upgrade parts really did the trick - I can comfortably play the guitar while sitting or standing. There is still a small amount of weight imbalance when playing while standing, but it doesn't prevent me from using the guitar. The old design was mostly impossible to play when standing up. The bigger side plates did add some more mass to the guitar. The old design was about 10.1 pounds, while the new design is around 12.6 pounds. I think I need to make a new guitar from scratch if I want to drop the weight and get the right weight balance. I think the neck and especially the head really mess up the center of gravity because they are the furthest portions from the body. An easy improvement would be changing the fretboard material to something less dense than stainless steel (titanium or aluminum). Overall I'm pretty happy with the guitar in its current state, and I probably won't get or build a new one for quite a while.
Posted by JB at 6:42 PM
Email ThisBlogThis!Share to TwitterShare to FacebookShare to Pinterest
Labels: Aluminum, Guitar, Machining, SolidWorks